11.08.2016#throwbackthursday with the Renault 4 Fourgonnette

Norev has brought a wonderful model car of the French city van from 1965 in 1:18 scale to the market. 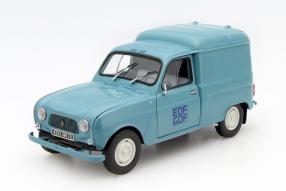 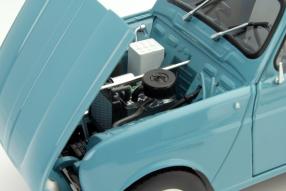 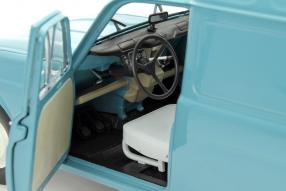 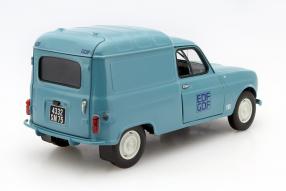 Again and again, the model making industry gives us a nice flashbacks in which they made model cars whose models were long our companions that we have but almost forgotten. For example, the Renault R4 or Renault 4, of the approximately eight million vehicles were built in the period 1961-1992. The French small car was the answer to the Volkswagen Beetle, with its front-engine, front-wheel drive and the practical tailgate but clearly for everyday use than the equipped with little loading Volkswagen. From 1965 to Renault offered the entry model also as a panel van, the Renault 4 sogegannten Fourgonette that by 1992 completed the program as F4 and there was since 1975 until the end of production with a longer wheelbase than F6.

The model, Norev now presented in two shades of blue, the short original version emulates and provides all-round opening doors. This makes it possible to open the rear door that allows access to the large trunk. Front struck the bonnet, swinging freely is accordingly the views of the 0.6-liter inline four-cylinder, which carried 17 kW / 26 PS and grew in later vehicles over the years to 25 kW / 34 PS. Water cooler, engine block, ancillaries and the shift linkage, which practically consists of a tube from the dashboard to the transmission, Norev has great recreated; many details are visible. Also on the prototypical replica of the sheet structure, the team of Vaulx-en-Vaulin has taken. is reproduced knowledge law also clad in little plastic interior; Instruments and switches are all available.

Top incidentally swings also associated with the roof part of the tailgate. The model is made of die-cast zinc and supplemented by elaborately reconstructed wipers. This beautiful model car Norev shows once more how much attention to detail do the French in their work. We like the little Renault and give it the highest rating. But we do not want to finish the article without briefly to look at the highlights of 1965, the Year of the model: Winston Churchill died, the Vietnam War had its first major battle. The tariff reduction of 10 per cent within the EEC came into force. Taiwan and the Federal Republic of Germany signed an investment protection agreement. The Soviet Union scored their first Fernsehsatelitten into space. The Mont Blanc Tunnel was opened. In the GDR, first came the birth control pill used. Werder Bremen won the Bundesliga and the band Scorpions was founded. Incidentally, who wants to establish a R4 Fourgonette as an everyday car, receives 4,500 euros copies with MOT until 08/2017.

Stop by, Friends: From 12 -14 August 2016 classic car fans can again make a spectacular and unique journey through seven decades of motorsport history. ck-model cars is at the AvD Oldtimer Grand Prix Nürburgring