Modelcars in scale 1:18 that are first class in detail get in the mood for the new edition of the 24 Hour Nürburgring: Manthey Racing celebrates its 25th birthday 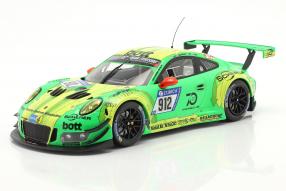 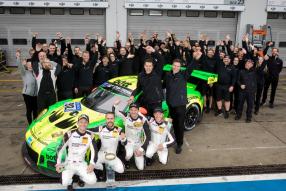 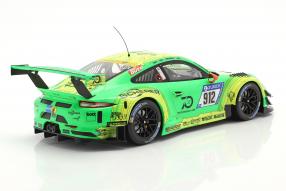 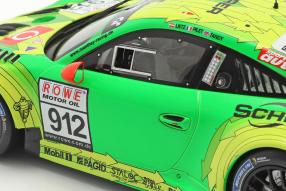 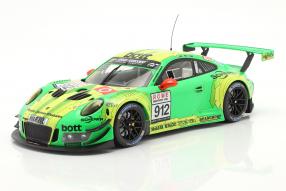 The modelcar label Ixo delivered two new Porsche 911 GT3 R, of which the role models come from a very special racing team: The 'Grello' from the season 2018, presented here and now in the design of the 24 Hour race at the Nürburgring, which has been won by the team from Meuspath with the Austrian Richard Lietz, the French Patrick Pilet, its compatriot Frederic Makowiecki and the Englishman Nick Tandy in the cockpit. The 46th edition of the ADAC Zurich 24 Hour race took place on May 12th to 13th, 2018. The Porsche 911 GT3 R with starting number 912 finished the race after 135 laps on the Nordschleife. In the 30th lap, the nine-eleven drove 8:17,340 minutes as its best time. The modelcars to this vehicle, built from diecast, are now available in scale 1:18 and under item number MG-I-911-18-1812-24H.

Last month, in March 2021, Manthey-Racing was in the spotlight in a very special way: The company based in Meuspath near the Nürburgring-Nordschleife was founded in 1996 by racing driver Olaf Manthey and thus celebrated its 25th birthday; Incidentally, closely associated with Porsche from the start. In 2013 Manthey merged his company with Raeder Automotive GmbH. In the same year, Porsche AG consolidated the successful collaboration with a 51 percent majority stake and has been consistently expanding it ever since. Manthey-Racing GmbH now employs around 200 people under the management of co-owners Nicolas and Martin Raeder. Among other things, she is responsible for the works team's Porsche 911 RSR races in the FIA World Endurance Championship (WEC).

The team finally drove its way into the hearts of the fans with the 911 GT3 R known as 'Grello' in the Nürburgring endurance series NLS or formerly VLN as well as in the 24 Hour race 2018 on the traditional race track in the Eifel, driven by its 4.0 liter six-cylinder boxer engine with 375 kW / 510 hp. “Manthey-Racing has been an important partner for Porsche since the racing team was founded in 1996. Together we have achieved a lot in motorsport, won numerous races and won titles,” says Fritz Enzinger, Head of Porsche Motorsport. “The enthusiasm and professionalism of the Meuspath team provided the basis for this. The two companies have belonged together since 2013 and have expanded their cooperation to include many business areas. I would like to thank you for this and congratulate you on your 25th birthday!"

Both pictures next to this article show the modelcars of the same role model, however, here in the decoration of the use at the VLN Nürburgring. Ever since the racing team was founded, the Nürburgring long-distance championship organizers - or VLN for short - have been part of the field of activity of the company from Meuspath. Since the start of this racing series, which has been held at the Nürburgring from 1977, Manthey Racing has always been able to leave the competitors behind: With more than 50 successes in individual races to date, it is the sole record holder in the Green Hell. The 2018 season ended for the Grello in 7th place overall; Ixo lists the miniatures for this exact appearance under item number MG-I-911-18-1812-VLN. Both cars next to each other: The best decoration for the new edition of the 24 Hours on the Corpus Christi weekend, from June 3rd to June 6th, 2021.

Here: Click to all modelcars, caps, hoodies and shirts of the Grello 911