Uncertainty lies over the coming season, of which the tests has been postponed. Maybe the modelcars from the previous year in scale 1:43 comfort something about it 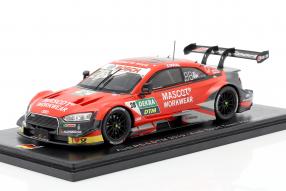 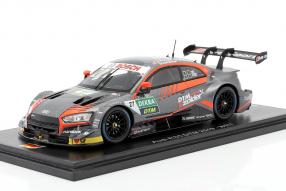 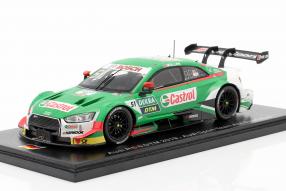 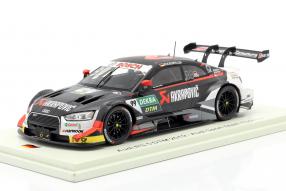 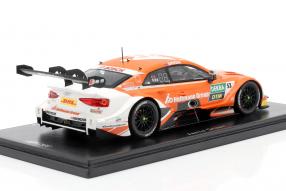 Corona and no end: The pandemic is currently overshadowing all of our lives and of course also the motorsport: The DTM-Umbrella organization ITR has together decided with Audi and BMW to cancle the test drives at the Hockenheimring. The test, which was scheduled over four days, would have been done last week, but was cancled because of the spreading corona-virus in Europe. This places the DTM in the series of countless other series up to the Formula 1, where the event calendar is whirled around. And we fans? No contact, curfews, calls like 'stay at home' affect our daily lives. In this time Spark delivers, as part of the specialist trade progam, the modelcars to the brand Audi, of which the role models went to the start in the DTM season 2019.

Last season was the 33rd year of the DTM and the 20th season since its new foundation of the series in the year 2000. It began with the first run, which was held on May 3rd, 2019, at the Hockenheimring and also ended there on October 6th. After the 18 races on nine racing weekends, René Rast on Audi was the winner with 322 points. With 250 or 202 counters followed his brand colleague Nico Müller and BMW-driver Marco Wittmann on the second and third place. Rast won the series for the second time after 2017; even prematurely after 16 of 18 races. Audi thus also secured victory in the brand classification; the Audi Sport Team Rosberg became team-champion. It was the first season without Mercedes-Benz: The manufacturer from Stuttgart maintained the commitment in the Formula 1 and set focus on the Formula E.

As mentioned at the beginning, Spark delivered the specialist trade models, which replicate the racing cars from Audi to the DTM 2019. The delivery includes the WRT Audi RS 5 DTM from Team WRT Team Audi Sport, for which Pietro Fittipaldi went to the start with starting number 21. The model with the item number SG445 is limited to 500 units. Teammate Jonathan Aberdein drove with the 27 (SG446). The hope from the Audi Sport Team Abt Sportsline for driver Nico Müller was rewared with runner-up: The miniatures of the poison green Castrol Edge Audi RS 5 DTM starting number 51 are limited to 300 units (SG449). Teammate Robin Frijns drove with the blue Aral Ultimate Audi RS 5 DTM with the number 4; the matching modelcars are also limited to 300 units (SG444). They are identical in the appearance of the line management as well as the perfectly made attachments.

The Audi Sport Team Phoenix brought its driver Loic Duval on the Mascot Workwear Audi RS 5 DTM to the race; Spark reduced its car with the starting number 28 overall 300 times (SG447). His teammate Mike Rockenfeller set on the cockpit of the Akrapovic Audi RS 5 DTM with the starting number 99. To this 300 models appear under the item number SG451. The delivery also includes the Hoffmann Group Audi RS 5 DTM from Audi Sport Team Rosberg, for which Jamie Green started with the number 53; also limited to 300 pieces under (SG450). The models may comfort a little over the late start of the season 2020. As of today, it should start on the weekend of April 24th to 26th in the Belgian Zolder. We cross the fingers that it works, because then the Pandemic would be defeated!