Minichamps presents with the 2002 turbo 1973 and the M2 Competition two models in scale 1:18, which aimed at the same interest group 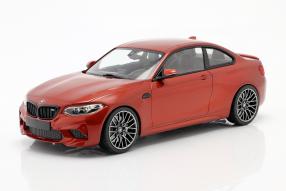 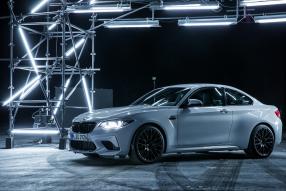 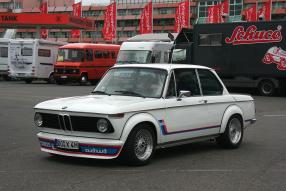 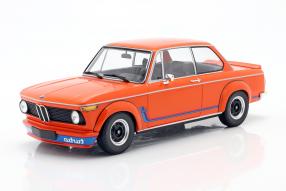 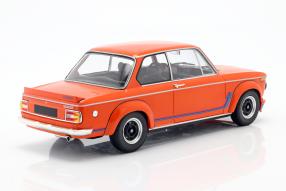 At this point we want to present two miniatures for the weekend, whose role models have appeared in a distance of about 46 years, but carry the same genes: Sporty driving compactly packed. With the BMW 2002 Turbo from the E20 series, the car manufacturer from Bavaria focused on the same clientele of active drivers as with the BMW M2 Competion from the F22 series. With the deliveries of the novelties this week, these two generations - between which half a decade is rounded - meet in scale of 1:18 and from Minichamps. The finish of both modelcars corresponds to the high demands of the fans of the Aachener products and perfectly match the appearance of their role models. Friends of the 2002 Turbo can be particularly pleased because miniatures of this quality did not exist in the 1970s.

Let's first take a look at the modelcars of the BMW 2002 Turbo, for which Minichamps names the model year 1973 and which appear in contemporary orange in a limited edition of just 300 units. The role model is based on the 02-series built under development code 114. The shorthand symbol E20 is only used for the 2002 Turbo. The car was the first mass-produced vehicle in Germany to be equipped with an exhaust gas turbocharger as standard, and thus even before the Porsche 930 Turbo - on the market in the middle of the oil crisis and in connection with its fuel consumption in the criticism: the four-cylinder with its 125 kW / 170 hp 2.0 liter displacement took its toll. From today's perspective, the maximum torque was given as just under 240 Newton meters (Nm); at its peak the 2002 Turbo reached 212 km/h.

Minichamps brings the models of the BMW, developed with a five-speed manual transmission, with the lettering referred to in the press as war paint on the front spoiler, which was held in mirror writing. The color orange corresponds to the spirit of the time, but from our point of view, the 1672 built vehicles were only delivered in polaris metallic silver and chamonix white from the factory. However, the choice of color does not harm the attractiveness of the model with the item number 155026202. It aligns itself to the miniature of the M2 Competion, which has been on the market since autumn 2018 with the model year 2019 and for which Minichamps delivers a model under item number 155028004 also made of diecast and with steerable front wheels in orange metallic and limited to 504 units. Its model is the successor to the BMW M2, which came to the market in 2015.

This facelift is particularly noticeable under the hood: The six-cylinder in-line engine in the Competition delivers 302 kW / 410 hp instead of 272 kW / 370 hp in the original model. With 550 Nm, the M2 Competion delivers more than twice as much torque to the rear-wheel drive than its ancestor BMW 2002 Turbo; shifted via six-speed manual or seven-speed dual clutch transmission. With 250 kilometers per hour or 280, the M2 Competition is naturally noticeably faster. The manual transmission is up to 100 km/h in 4.4 seconds; The 2002 Turbo takes 6.9 seconds. This also shows what has changed in design and technology in 46 years, but in spirit the two modelcars are as close together as their conceptually identical predecessors, which should simply be parked next to each other in a collector's showcase!

Here: Click to the modelcars from Minichamps the BMW 2002 and M2 Competition