Gilles Villeneuve competed with the Ferrari 126CK against a Lockheed F-104 S in 1981. Two models in 1:43 and 1:12 are reminiscent of the great driver and this challenge 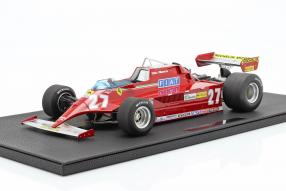 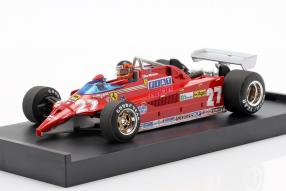 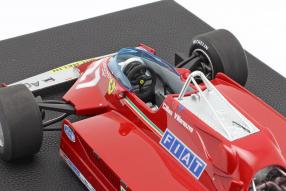 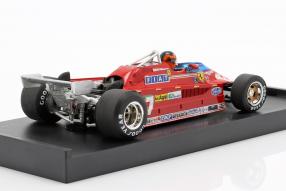 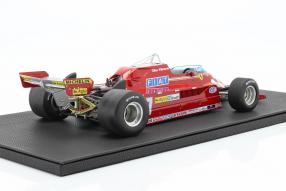 Its problematic handling, made Gilles Villeneuve's Ferrari 126CK the perfect racing car for long straights. Both his teammate Didier Pironi and engineer Harvey Postlethwaite, who came to the Scuderia Ferrari in 1981, were of the opinion that it was not the chassis that was the main cause of the car's handling problems, but the very poor aerodynamics. Postlethwaite later said that the 126CK "had a quarter of the downforce the Williams or Brabham had this year." The poor aerodynamics of the car combined with the hard chassis created a tendency to let the vehicle slip in curves before the ground effect pulled the car back onto the track. It is now two modelcars that draw our attention to the 126CK: one by Brumm for racing against the Starfighter and one by GP replicas.

But before we talk about it, we will give you some basic information: In 1981 the Ferrari 126C replaced the very successful, but outdated 312T-Series, which had been used since 1975. The fundamental design of the chassis was kept, but Ferrari had to change from V12-Naturally-Aspirated to V6-Turbo-Charged: The smaller and narrower six-cylinder fit better to the ground effect-aerodynamics; the wider V12 hindered the airflow, which was necessary to create an efficient floor effect. In terms of qualification, the engine produced around 447 kW / 608 hp; in the races 410 kW / 558 hp. The modelcars by Brumm in 1:43 of Diecast and GP Replicas in 1:12 of Resine are both technically excellent representatives of their species. But the Brumm model is missing something: the front wing, which was removed for the acceleration race on October 21st, 1981.

On that day, legendary Ferrari driver Gilles Villeneuve challenged a Starfighter F-104 S to an acceleration race. Villeneuves Ferrari drives without wings to achieve the best possible top speed. The F-104 is a fighter aircraft built by the American company Lookheed, which had its maiden flight on March 4th, 1954, and is just as legendary in its field as a Formula 1 Ferrari. The day and interceptor was only used by the United States until the late 1990s; in the NATO until 2004. The Starfighter was optimized for high speeds and climbing performance and most recently served the Bundeswehr (defense unit of Germany) as an all-weather fighter-bomber. In Germany, he also gained popularity due to a procurement scandal. Villeneuve fought against the plane at the Istrana military air base in northern Italy.

Villeneuve, who was born in Belgium on January 18th, 1950 and died in an accident during the final training session for the Belgium Grand Prix in 1982 at the Circuit Zolder, competed in 67 Formula 1 races from 1977 to 1982; 66 of them for the Scuderia Ferrari. Before that he had won the title of the Atlantic Championship, so the American counterpart to the Formula 2 three times. His most successful season in Formula 1 was in 1979, which he finished as runner-up. The popular racing driver prevailed against the aircraft from the squadron of the 51st squadron of the Italian aircraft and narrowly defeated the Starfighter at the 1-km-distance. A beautiful story that the fans like to remember. The Ferrari 126CK finished the Formula 1 Season of 1981 with the fith place in the manufacturers rating; its two successors won in 1982 and 1983.

Here: Click to the modelcars of the Ferrari 126CK