With modelcars in scale 1:18 and of diecast, a dream car of the 1970s celebrates its resurrection in three versions 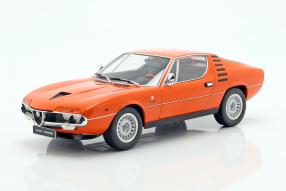 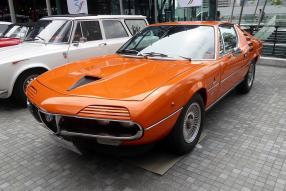 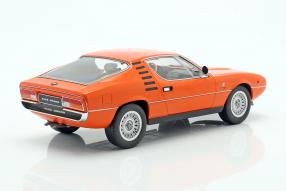 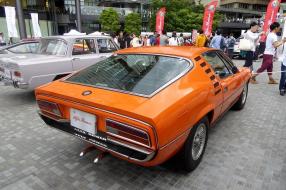 The Canadian city Montreal was the inspiration for the naming of the design study, which was presented at the world exhibition Expo 67 by former chief designer Marcello Gadini of Bertone: the birth hour of the Alfa Romeo Montreal, for which series production was then decided. These days, the breathtaking, beautiful coupé was delivered by KK-Scale with three handcrafted scale 1:18 modelcars that come in three colors to collectors: in silver metallic paint under the item number KKDC180382 in an edition of 750 units, 750 times in orange under KKDC180383 and in red (KKDC180381) limited to 1,500 units. The collectors have to dispense on functional parts such as opening doors and hoods, but the impressive lines that the manufacturer has transferred to the model in a way that cannot be topped.

Let's take a look back: The Montreal was built from 1970 until finally 1977. Sources say 3,917 cars were made, but 3,925 vehicles are also mentioned in this context. It has been handed down that Alfa Romeo is said to have worked more thoroughly in rust prevention. And that is the reason why there are still a lot of cars out of the comparatively small production volume. If you ask the portal mobile.de, 15 Alfa Romeo Montreal are currently available: A non-roadworthy example of the sports car powered by an eight-cylinder engine with 147 kW / 200 hp is offered for 34,500 euros; If you put 10,000 euros on it, you can sit down and drive off in an accident-free Montreal. Adjusted for inflation, its new price was EUR 49,700; today it costs as much as it cost new.

So that's actually called preservation of value. The 2.6 liter engine has a five-speed gearbox and, due to its dry sump lubrication, requires around eleven liters of engine oil; the maximum speed is stated at 220 kilometers per hour. The beautiful car was and is particularly noticeable through the slats on the headlights and the side ventilation openings. The latter pretend to be a mid-engine, but the drive set is under the hood at the front. The manufacturer of the model carried out the slats, the chrome bumpers, the light alloy rims as well as the decorative frames around the windows perfectly. The appearance of Gandini's design has met KK-Scale down to the last detail. The sporty, comfortable interior is crowned by a wooden steering wheel. Just as this model is the crowning glory of every sports car collection.