With the great modelcars of the conversion of the legendary DS in scale 1:18, CMR has targeted two target groups 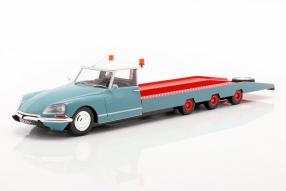 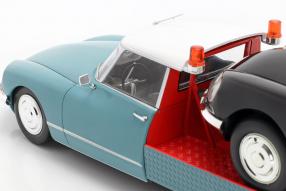 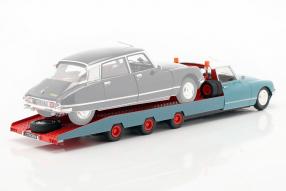 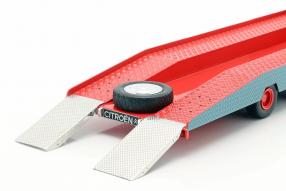 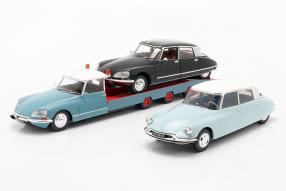 During the toy fair in Nuremberg, CMR has delivered the modelcars to the Citroën DS Tissier car transporter from the year 1970, which is initially kept in the blue / white color scheme. The miniatures are produced of diecast and offer the possibility to present historical cars from the company history of Citroën in the collection in a way never seen before. At the front, the models offer the familiar face of the DS; starting with the B-pillar, the replica and role model consist of a perceived endless platform. Since the brand's debut in November 2015, CMR has scored with an ever-expanding range of historic racing cars, record-breaking vehicles and sports cars of diecast. Another color variant of the Citroën DS Tissier car transporter is planned for the 1st quarter of 2020. We present the novelty in this article.

With the Citroën DS Tissier car transporter in the format 1:18, CMR has integrated an impressive model into its portfolio based on a no less remarkable role model. The DS appeared on the market in 1955. The futuristically designed limousine from France not only left the assembly line as a four-door car, but also as a station wagon break. The front-wheel drive proved to be helpful for commercial vehicle manufacturers such as Pierre Tissier, who stretched the chassis to use it, for example, as the basis for the well-known fast transporters with which newspapers from France were once delivered to Germany. As with the prototype of our miniature, the 2.3 liter four-cylinder with 93 kW / 126 hp pulled a three-axle loading area behind it, which grew to a width of two meters. Overall, the vehicle, of which three are said to still exist, measures 9.4 meters in length.

At the model it is about 45 centimeters. In the truest sense of the word, the hydraulic suspension was accommodating, which could get to its knees when loading by lowering the body; just like the other vehicles in the series. At a time when modelcars for racing transporters are experiencing a real hype in the scene, the Citroën DS Tissier car transporter comes onto the market at just the right moment. It appears under the item number CMR138 exclusively at modelissimo, littlebolide and ck-modelcars.de with a finish that is outstanding from a craft point of view. The details, such as the headlights, chrome bumpers and indicators as well as the interior of the cab, are just as convincing as the processing of the loading area. These models are aimed at two target groups: friends of Citroën and those of the racing transporter.

Here: Click to the modelcars of the DS Tissier car transporter