With the modelcars only available at ck-modelcars.de in scale 1:43, Spark appreciates the farewell of a popular motorsports athlete 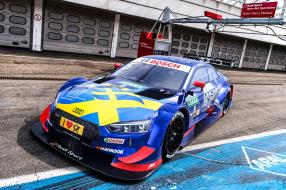 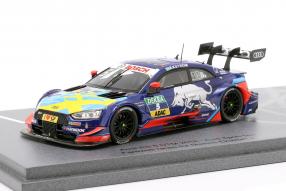 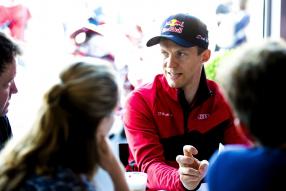 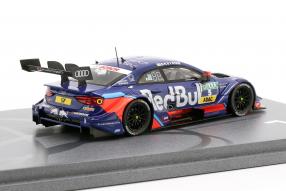 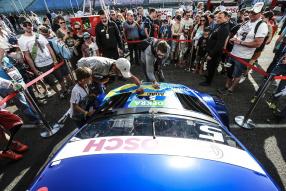 An emotional farewell after a total of 17 years in the DTM: Mattias Ecktröm started at the season start of the DTM 2018 at the Hockenheimring on May 5th and 6th for the last time in the popular touring car series with an additional Audi RS 5 DTM used by the Audi Sport Team Abt Sportsline. At the end of January, Ekström announced his exit from the DTM. At that time, he intended to concentrate with his team EKS Audi Sport on the engagement in the FIA World Rallycross Championship. According to him, it was a difficult decision for him - also because after 17 years of DTM he could not say goodbye to his many fans in a fitting way. Audi gave this opportunity to the in Munich living Swedish guy at the start of last season: with the role model of our modelcar!

The exclusive model is only available in the ck-modelcars.de web shop, the miniatures with the item number SG001CK, which come from the high-quality polyurethane resin of the production of motorsport professional Spark and come to the collector in scale 1:43. As not otherwise used by this company, the look and proportions of the modelcar are exactly right; the details around the spoiler and splinters, in the interior and in the printing are of unique quality. This includes the donuts sketched on the enlarged base plate and their realistic tire tracks. The 39-year-old Swede contested the first two DTM races of the 2018 season outside of the standings with the role model of our modelcars in Hockenheim. In addition, a whole series of actions with the two-time DTM champion was planned for the fans.

"Mattias decided in winter to end his unique DTM career", said Head of Audi Motorsport Dieter Gass at the time: "He also told us that he would like to say goodbye to the DTM fans with a special campaign. That's how the idea of the farewell race weekend came about. I think it is a great thing for him, for the DTM, for the fans and of course for Audi that he will start again at the season opening in Hockenheim. There were a few hurdles to overcome, but we made it possible to use a seventh Audi RS 5 DTM. For our team it is quite an effort. At the same time, everyone in the team was immediately enthusiastic about the idea and spontaneously agreed to support them.” On this occasion, his Audi RS 5 DTM received a special design from its long-time partner Red Bull with the hashtag #AdjöMattias.

Ekström started the weekend without previous test drives and was therefore only able to get used to the current DTM car with the reduced aerodynamics in Hockenheim. Mattias Ekström started his DTM career in 2001 at the age of 22 in the Audi customer team at ABT Sportsline. In 2004 he started as a works driver for the first time and immediately claimed his first DTM title. Title number two followed in 2007; he just missed another overall victory last season. In total, the Swede has competed in 195 DTM races in 17 years. With the two titles, 23 wins, 20 pole positions, 18 fastest laps in the race and 1,219 points, he is the most successful Audi DTM driver ever born in 1978. One more reason to secure this excellent modelcar, isn't it? Have fun with the video embedded above! We wish you a happy weekend and a nice 4th Advent!