The fans of the noble Briton should feel addressed by several new modelcars in scale 1:18, but the new star is not yet available as a miniature 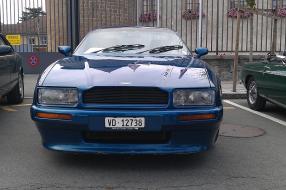 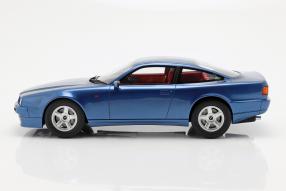 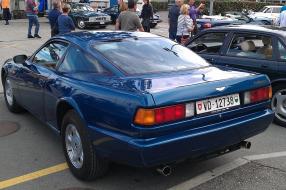 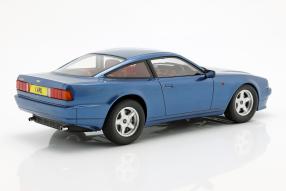 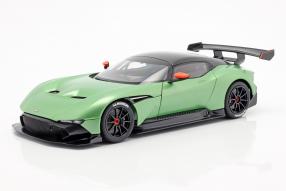 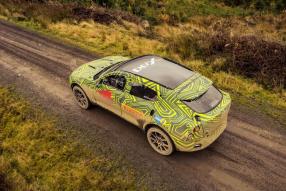 Over the past few days, fantastic modelcars based on role models from the brand Aston Martin have found their way into our portfolio. There are miniatures on the one hand of the the Vantage from the model year 1988, which Cult Scale delivered under the item number CML035-2 in blue metallic as well as in format 1:18. On the other hand there is the Aston Martin Vulcan from 2015, to which Autoart - ownspelling AUTOart - has presented modelcars of the same size in the colors apple green metallic and madagascar orange (70263, 70264). The Vantage comes of high quality polyurethan resine to the collector and waives functional parts, whereas the Vulcan of diecast offers openable doors. However, there is no model for an Aston Martin to which we receive a press release yesterday: no wonder, because the model is not yet on the market.

But before we come to this novely, we want to take a look on the modelcars of the Vantage 1988 and Vulcan 2015, which make a nice picture next to eachother in a showcase. The model designation Vantage is used since 1951 and decorates since then and until today 13 vehicles. The miniature from Cult Scale Models replicates the Aston Martin Vantage 1988 according to the manufacturer. But as wee see it, the miniature is rather a replica of the Aston Martin Virage, which was presented in 1988 and has been built only 877 times until 1996. After 1996 the poorly sold car had been slightly revised and therefore was led in the price lists only from the year 2000 as V8 or Vantage. The modelcars replicates the original version without any doubt: Recognizable by the headlights from the Audi 200 and the rear lights from the VW Scirocco II.

The Virage was powered by a 5,3 big V8 with 246 kW / 330 hp, which was good for a top speed of 254. A real rarity and for sure an enrichment for the showcase. In which the miniature of the Vulcan would also fell good: With a 7,0 liter V12 under the hood, which developes 611 kW / 831 hp, the Vulcan counts to a completely different league. But that's the way it should be, because the Vulcan is designed as a racing car without beeing street legal and fulfills all required conditions of the FIA for racing use. The monocoque designed by Aston Martins designer Marek Reichmann consists of carbon fiber reinforced plastic and is a custom made by the Canadian company Multimec. The company Ray Mallock Ltd. builds the vehicles on customer request in such a way that they are allowed on the street.

The Vulcan accelerates in 2.8 seconds to 100, to which Autoart has realized mega modelcars, which offer a great insight into the interior via the doors that can be opened and exactly match the look of the design of the prototype. Keyword role model: We would like to introduce you to a model of the Aston Martin DBX, but there we have to wait for the model first. As the manufacturer announced, the first SUV of the brand will be presented in the fourth quarter of 2019. Currently, the DBX is undergoing the most comprehensive test program ever completed by an Aston Martin. The Sport Utiliy Vehicle will be powered by a 4.0-liter twin turbo V8 with which the DBX wants to build on the driving experience of a modern GT, as Aston Martin expresses it. We are curious if that's true and look forward to these miniatures!

Here: Click to the modelcars to the topic Aston Martin