The four-door coupé experiences its fair premiere with an exclusive model from Aachen, of diecast, which we want to present in detail / weekend action at CK 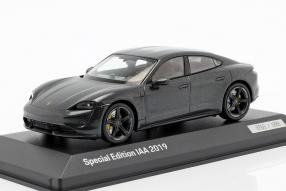 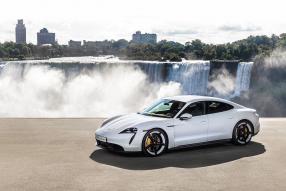 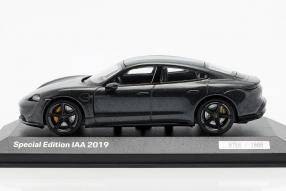 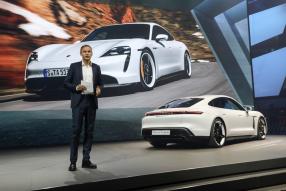 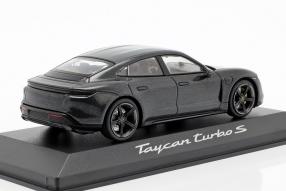 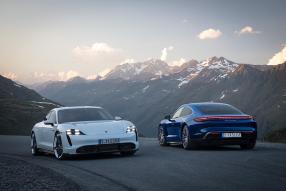 The brand new modelcars to the Porsche Taycan Turbo S, which Minichamps produces for Porsche, celebrates its premiere with its fans at the IAA in Frankfurt, which is opened for the public on September 12th to 22nd. Minichamps brings the first miniatures in vulcano grey metallic, built of diecast as well limited to 1000 pieces in this color. And this as a fair-edition with an IAA note on its mounting plate. The Taycan is the first full electric sportscar from Porsche. It was presented for the first time on September 4th, 2019, in Europe, China and the USA. In terms of appearance, the four-door coupé essentially corresponds to the concept study Mission E from 2015 and is located below the Porsche Panamera. Porsche has stated that there will be a whole family of models for the Taycan. We'll take a closer look at this new car and its miniatures.

The modelcars are available under the item number WAP0208510LIAA and appear in the Porsche factory packaging. They replicate the Porsche Taycan Turbo S, whose power is indicated with 560 kW / 761 hp. The manufacturer seperates between the biggest Launch-Control-Performance and the continuous output, which should be 460 kW. The Turbo S provides its driver 1.050 Newton-meters (Nm) of maximum torque; in the smaller model turbo it is 850 Nm. In the weaker variant are 500 kW / 680 hp of power. The Turbo S is at 100 kph in 2.8 seconds, the smaller Turbo in 3.2; The maximum speeds of the two cars is sealed at 260. The all-wheel steering is available without an additional charge, only for the Turbo S. The ranges at the Turbo are indicated with 381-450 km, the stronger Taycan with 388 to 412.

Porsche Taycan Turbo S and Taycan Turbo form the spearhead of Porsche E-Performance and are among the most powerful production models that the sports car manufacturer has currently in its product portfolio. Less powerful variants of the all-wheel drive will follow this year, according to Porsche. At the end of next year, the Taycan Cross Turismo will be the first derivative. Unitl 2022, Porsche is investing more than six billion euros in electromobility. "The Taycan combines our tradition with the future. He continues the success story of our brand - a brand that has been fascinating and inspiring people around the world for more than 70 years", said Oliver Blume, CEO of Porsche AG, who opened the world premiere of the Taycan in Berlin: "This day marks the beginning of a new era."

The Taycan is the first series vehicle, which enters with a system voltage of 800 volt instead of 400 volt at the common electric cars. Taycan-drivers are going to benefit from this especially when they are on the move: In just over five minutes, with direct current (DC) in the fast charging network will recharge energy for up to 100 kilometers (according to WLTP). The charging time for five to 80 percent SoC (state of charge / battery charge) is 22.5 minutes under ideal conditions, the maximum charging power (peak) 270 kW. The total capacity of the Performance Battery Plus is 93.4 kWh. At home, Taycan drivers can comfortably charge their car with up to 11 kW of alternating current (AC) power. The Porsche Taycan Turbo S and Porsche Taycan Turbo can be ordered from now on and cost 152.136,00 euros, including VAT 185.456,00 Euro in Germany. The modelcars are then considerably cheaper.

And they present itself in the same quality as the Porsche 911 from the house supplier Minichamps. The mold makers from Aachen have transferred the lines with the brand-typical curves perfectly to the scale 1:43. The layout of the headlamps, the engraving also of the flap for the power cable and the beads on the front hood and roof are executed with excellent craftsmanship. The look is right, but the finish of the small rims and brake discs attracts attention: In this way, the electric era makes fun in 1:43 format! This weekend, our CK trailer is to be found at the DTM at the Nürburgring in the Ringboulevard! At the same time we are there for you with our sale tent in the paddock at the ADAC GT Masters in Hockenheim, of which we will report you early next week.

Here: Click to the modelcars of the Porsche Taycan Turbo S