27.03.2019Nobleness for the showcase: Mercedes-Maybach Cabriolet from Norev

With a wonderful miniature out of diecast in scale 1:18, the team from Vaulx-en Vaulin moves its craftsmanship into the spotlight 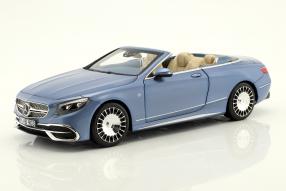 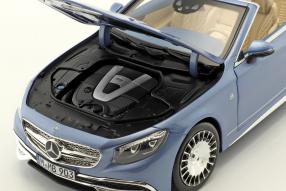 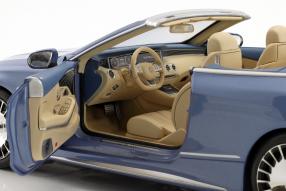 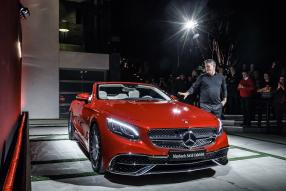 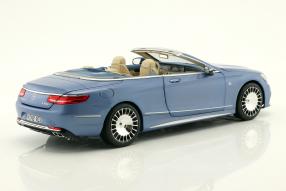 Let's look back: The night before the Los Angeles Auto Show, the 16th of November 2016, the first cabriolet from Mercedes-Mayback celebrated world premiere. The luxurious four-seater, limited to 300 pieces, came in the spring of 2017 to the market. For the drive ensures a 6.0 liter engine as V12 with a power of 463 kW / 630 PS. According to the power source, the interior of the first open Mercedes-Maybach offers lovers the very best of high-end luxury. Unique are nine additional color concepts for the interior, the trim parts - refined on request with Flowing Lines - as well as the craftsmanship of the leather seats with waterfall-like perforation. Norev has taken on this king of the magnificent boulevards and presented now with the modelcars of the item number 183471 in scale 1:18 the specialized trade edition.

The best news we want to get rid of directly: The models are significantly cheaper at just under 100 euros, as the approximately 300,000 euros net, which were to invest for the long-sold-out role model. The Mercedes-Maybach S 650 Cabriolet is based on the open S-Class with the internal series designation A 217. The vehicle embodies from the perspective of the manufacturer with its ultimate open-air exclusivity modern luxury and is exemplary of the brand's own design philosophy of sensual clarity : It's hot and cool at the same time, as Daimler Chief Design Officer Prof. Gorden Wagener puts it, adding that the Mercedes-Maybach S-Class Cabriolet represents the ultimate in luxury and, in his opinion, a real beauty with an enchanting aura. The fans can convince themselves of it with the scael 1:18 diecast model.

Let's take a look at the details that Norev has transferred 1:1 to the modelcar, which precisely matches the appearance of the prototype as well as its lines and proportions: Exclusive Mercedes-Maybach features include a new front bumper with an upgraded lower part and numerous chrome highlights for the visible underpainting of the special luxury claim. On the fender, the Maybach emblem is inconspicuous but elegantly staged. Very nice: The replicas of the 20-inch Maybach forged wheels. The team from Vaulx-en-Vaulin, not far from Lyon, has given all these subtleties the utmost attention and has also given a dash of attention to the interior details: no switch, no display, no crease in the seat has been forgotten. And as a coronation, the French are added a detachable soft top to the model. Bravo!

The key data to the role model

Let's take a look at the most important data of the prototype in short form: As already mentioned, the Mercedes-Maybach S 650 Cabriolet is powered by a 6.0-liter twin-turbo V12 with a maximum torque of 1,000 Newton meters (Nm) using seven-speed G-Tronic is transferred to the rear wheels. The combined fuel consumption of the group with 12.0 liters per 100 kilometers. The maximum speed is regulated at 250 kilometers per hour. In 4.1 seconds, the Mercedes-Maybach accelerates from zero to 100 km / h. The Airmatic air suspension includes a stepless damping control; after all, the model steerable front wheels and all-round hoods and doors.