Minichamps reduces the open version of the model series 992 and brings a really succeeded miniature in scale 1:43 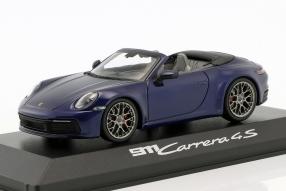 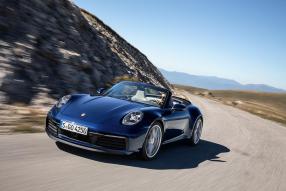 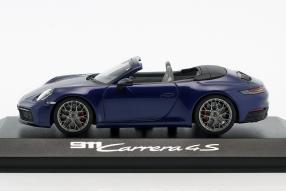 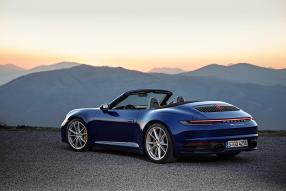 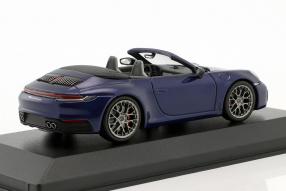 The customers and fans had been excited, when Porsche presented the Prototyp of the first 911 Cabriolet in September 1981 at the International Automobil exhibition IAA in Frankfurt am Main. Since then, the open eleven version has a regular place in the model range, which has been delivered since 1982. In January 2019, the Stuttgart presented the generation 992, which has all the innovations of the new coupe and were also given specific enhancements for the Cabriolet on the way. First and foremost, this involves a new hydraulic system that opens and closes the soft top faster than before. As a world novelty, Porsche has developed the standard Wet Mode. The function detects water on the road, conditions the control systems accordingly and warns the driver. Minichamps brings the first in 1:43 to this vehicle.

The new 911 Cabriolet is wider, more confident and muscular overall than its predecessor. Above the large wheels with front 20 and rear 21 inches diameter bulge wider fenders. The rear-wheel drive models take over the previous body width of the four-wheel models. The increase in the rear axle here is 44 millimeters. The front section, which has generally been widened by 45 mm, picks up on a traditional theme of earlier 911 generations: the long-drawn boot lid with a distinctive depression in front of the windshield. Both stretch the front end and gives dynamism and is like all other details also perfectly implemented by Minichamps in the scale 1:43. The proportions and their appearance, the lines and the details in the interior correspond to the quality image of the brand.

Minichamps takes these expectations into account with the high-quality manufactured model and delivers under the item number WAP0201730K a first-class processed miniature in the color gentian blue. What they naturally can not do is to offer the hood technology that is included in the model, which costs as 911 Carrera 4S from 142.259,00 Euro and as 911 Carrera S from 134.405,00 Euro. The roof structure integrates two-dimensional magnesium elements, the so-called surface mirrors, which prevent the roof from swelling at high speeds; something that the first 911 already could show as a cabriolet. The roof can be opened or closed within twelve seconds thanks to revised roof hydraulics up to a speed of 50 kilometers per hour.

The engines of the new 911 Cabriolet

The 911 Cabriolet starts as Carrera S with rear-wheel drive and as Carrera 4S with all-wheel drive. Both rely on the 2,981 cubic centimeters, turbocharged six-cylinder boxer engine with 331 kW / 450 hp at 6,500 / min and 530 Newton meters (Nm) of torque. An improved injection process and further optimization measures such as newly arranged turbochargers including intercooler increase the efficiency and reduce the emissions in the drive, as in the Porsche 911 Coupé. The power transmission is handled by the newly developed eight-speed dual-clutch transmission. According to Porsche, the Carrera S accelerates from 0 to 100 km / h in 3.9 seconds and reaches a top speed of 306 kilometers per hour. 304 and 3.8 seconds are the Carrera 4S; 3.7 seconds and 3.6 seconds, respectively, is the optional Sport Chrono package.

Here: Click to the modelcars of the new 911 Cabriolet