With the Lotus E23 Hybrid another model car for a model of the current Formula 1 celebrating Premiere 1:43 scale. This time from Minichamps. 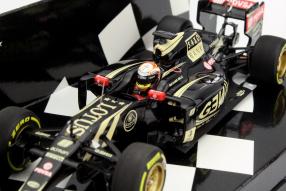 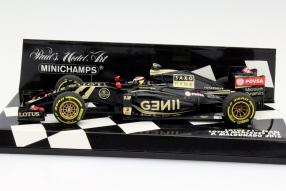 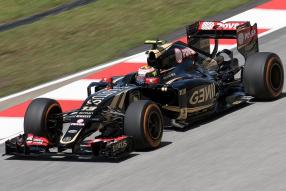 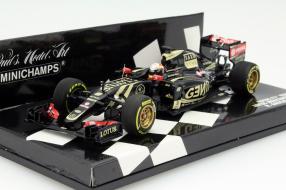 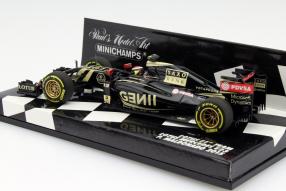 Well dear model car friends, are you awaiting the restart of the formel 1 this weekend? Are you exited to hear the roar of the motors or to see another win from Sabastian Vettel or Nico Rosberg? We are. But next to the formel 1 another battle that has to do with this topic is brewing. But the decision wont be made on the race track.

While the model car maker Spark Miniatures already brought he first of the new f1 models made of resin on the market The Aachener label Minichamps are catching up with models made of die-cast zinc. The team The team led by Paul G. Lang brings shortly after the debut of the first F1-model Manor in 1:43 now the current Lotus E23 in the same scale, with the drivers Pastor Maldonado and Romain Grosjean in Spa-Francorchamps.

Team Lotus and their story

Somehow weird, a race car from the Lotus team carries a Mercedes motor. But so is it. Since 2010 the team belongs to the Luxembourg investment company Genii Capital.  they were supported by the British sports car manufacturer Lotus Cars until spring 2012. A relationship with the rich tradition, The Formula 1 team of the same name, active from 1958 till 1994, does not exist. Also Team Lotus Racing could not to be started with a license from Malaysia, which used the name team lotus in 2011 Today Lotus F1 has emerged from the Renault planed team that was engaged 2001-2009 in Formula 1; built by Renault of the acquired team Benetton, whose origins in the founding of Toleman 1981.

Strong Motor, not alot of Points

From the financial difficulties of the current team, we do not want to talk here about the difficulties with the supplier of tires and impending insolvency proceedings, but we can't speak of great results either:-After 10 Grand Prix in 2015 are only 35 points on the board the constructors' championship, which, after all, still the 6th Place. The Lotus E23 is called so because it is the 23 racing cars, which originated in the workshops of Enstone.

He was endowed by its designer Nick Chester with a nose, that resembles the cars from Mercedes-AMG Petronas F1 Team. It is the first vehicle of the team that is not powered by a Renault engine. The car that is allowed including the driver 702 kg does not have the good results that other teams with Mercedes engines, such as Williams, have to offer.

The engine carries the designation Mercedes-Benz PU106B hybrid, has 1.6-liter displacement - which are spread over 6 cylinders in V-arrangement - and a turbocharger. This has the Lotus F1 on the same power source, such as Nico Rosberg and Lewis Hamilton. The car of Pastor Maldonado (Car Number 13) and Romain Grosjean (# 8) are published under the item numbers 417 150 013 and 417 150 008 to each of 69,95 Euro and correspond in shape, look and appearance exactly the models, but also the high standards that Hugo Ripert and Spark have set in this segment.

We are curious to see how the fight continues to licenses for the manufacture of Formula 1 model car; the mere fact that Bburago has reacted to current Ferrari in the 1:18 scale this year which we have reported in the accessed via this link products - is considered minor sensation. So, now, dear fans, you should have a cool drink and enjoy the start of the 2nd half of the 66th Formula 1 World Championship. We wish you a nice weekend.