The small series label brings a high-quality miniature of the car used by Mario Andretti With a model in 1:18 scale 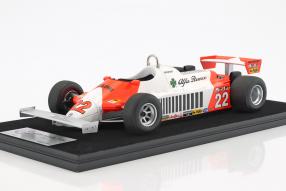 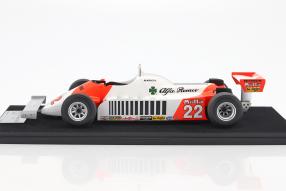 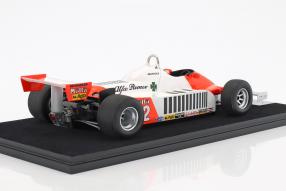 With the Shanghai Grand Prix, the third race of this year's Formula One season will be on the calendar this coming weekend. Alfa Romeo is also back, as a partner of the Sauber F1 Team. Will the Swiss get cash for taking over the name of the carmaker or is this the way Sauber brings in the latest engines from the production of Ferrari? Meanwhile, the team from Hinwil is in eighth place in the Constructors' Championship with two points, although Sebastian Vettel's supposedly identical motorized car leads the table after two wins and a third place. It looked a little better at the time when Alfa Romeo was still racing with its own team in Formula 1. In 1981, for example, in the year in which the Alfa Romeo 179C intervened with Mario Andretti in the racing scene.

However, the career of the racing car was not from the beginning under the best star, because in the literature is handed down that its builders did not calculate the best chances and quick successes. The ground-effect vehicle was designed as an Alfa Romeo 179 for the 1980 season, was fast but prone to defects. Most of them accounted for the V12, which brought the car on the one hand to a pole position, on the other hand, the race did not survive. For 1981, the racing car was revised and designated as 179C. Mario Andretti moved from Lotus to Alfa Romeo and reached the fourth straight place at the start of the season, but this should remain the best result: The 3.0-liter V12 did not stand firm.

Our model car, on the other hand, is a real world champion, because the processing quality of the Alfa Romeo 179C in 1:18 scale is of the outstanding quality, as we know from LookSmart. The team produced the model delivered in a high-quality cabinet in the decoration of the Grand Prix of Germany, which was held on 2 August 1981. With 1: 50.64 and 1: 50.73 minutes Andretti achieved the twelfth starting position in the two training sessions. In the race, he should drive with 1:56, 21 his fastest lap and finish in ninth place. Andretti came home with one laps behind Nelson Piquet on Brabham-Ford. In seven out of 15 races Andretti and the 179C saw the checkered flag in 1981. We are keeping our fingers crossed for Sauber, which it will run better for the sympathetic Swiss under the name Alfa Romeo.

Click here: for the model car of Alfa Romeo in 1:18