Minichamps brings the advertising model for new Audi and proves a great variety of details and of how well the cooperation between car and model car makers run. 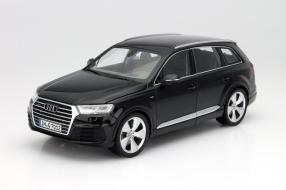 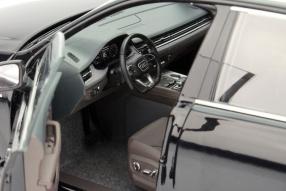 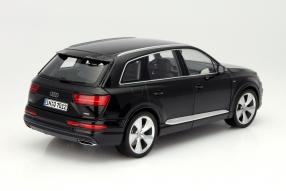 Minichamps has  reduced the new Audi Q7 into scale  1:18, and is  providing the first model car  in the length of  5.05 meters  luxury SUV: The 2nd generation of the Q7  with its 1,968 meters in width and in height of 1.74 meters looks like  a real fat chunks. This impression is enhanced by the relatively steeply inclined windscreen and the massive front; all in all, it makes this composition as a prop occur like a part of a  end-time movie. The team around Paul and Romy Lang secured the license to manufacture the model car, which  first came out in Argus Brown Metallic under item number 5011407615 as an advertising model. Now  the Ingolstadt-Aachen Cooperation brings the  color version orca black-metallic  (5011407625 / 89.95 Euro) and also  meets   the model perfectly.

Authentic interior equipment, a detail-equipped engine room, working steering and opening bonnet, tailgate and front doors are standard on the made of zinc diecast car model. The  more than 28 centimeters long  chunk also has exactly the quality, for that the teamof Minichamps is known: high-quality in the body  and the paint, small gaps and  flawless fit the hoods and doors. That the proportions of the model exactly match those of the first prototype introduced December 13, 2014 doesn't surprise anyone. In the Audi Q7, however, it's worth  more than ever to look at the details.


Most beautiful element in our view, is indeed the frosted Grill frame fit  perfectly into the environment of die-cast zinc. The headlights of the model are a perfect copy. Beads and lines were taken accurately; the glazing sits immaculately. A glass roof is not on board, but there is a roof railing. The motor is three-colored ; a little more depth would not have hurt it. The fans have to do without openable rear doors; but not without the  many details  in the interior. Dashboard and seats, center console and door inner panels are formally very well made and colored prototypically. The instrumentation and coloring the switch know to convince. There is no question that the model car  in 1:18 meets the  high standarts of its successful predecessor.