Further in the sports car week Maisto shows the friends of Model cars, how cheap good miniatures can be. 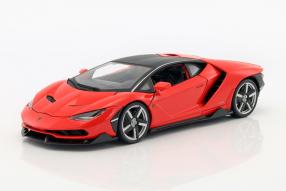 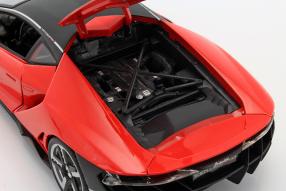 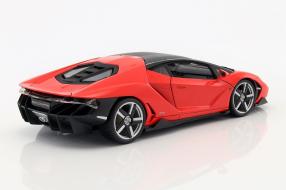 Following the prototype of the Lamborghini Centenario LP 770-4, Maisto introduces a friendly red, but nevertheless a model car that is as martial as its prototype, which is available under the item number 31386R. The small Centenario is made of die-cast zinc and offers doors and bonnets to open, but also makes a very detailed impression of the rear-mounted engine. The coupé celebrated its debut at the Geneva Motor Show and its accessories, but all 20 copies of the closed version had already been sold. The name Centenario refers to the term from the Italian, means centennial and is in this context for the 100th birthday of Ferruccio Lamborghini, which reminded of the Paris 2016 also as a roadster car. We look at the model.

Yes, the model car of the Lamborghini Centenario has everything that a very good model car in the size 1:18 needs: a fascinating appearance from the model, many, fully functional parts and a love for detail in the implementation of exciting assemblies, the fans Always discover new little things. And: doors and hoods to open, which means that you can always have something to play in your hands when you are talking and watching TV, if you like and the model is not easily dusted in the showcase. Believe us: From experience, we know that the miniatures are much more fun when they are part of everyday life, on the desk between documents and the PC park and have to be reordered again and again. The binding to the model is thus greater and the fun of it increases so disproportionately.

The Maisto model in the assessment

Maisto has perfectly matched the appearance of the super sports car and thus the lines and the design. The look of the model coincides with the appearance of the model. The butterfly doors and the front can be opened wide. Under the rear, also wide opening flap in the rear hides a hand-made meticulously made reduction of the 12-cylinder in V-arrangement, which from its 6.5-liter displacement brings 566 kW / 770 HP and thus slightly exceeds the values ??of the Lamborghini Aventador , On which the Centenario is based. The all-wheel drive is just as well recognizable on the model as the carbon structure, which the model car has exactly as thoroughly assumed as the lines in the interior.