NZG surprised the fans already with the black top version of the current bulli, with the two-color lacquered version in 1:18. 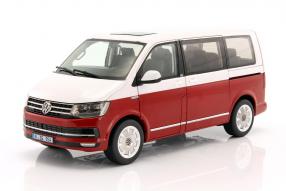 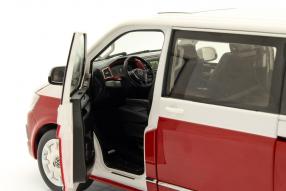 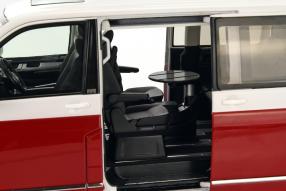 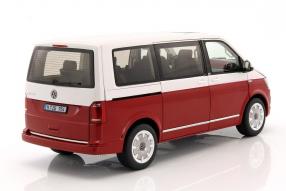 In mid-May, we presented the sensationally successful model from NZG, which replicates the Volkswagen T6 in the 1:18 scale. The version Multivan of the Kleinbuss is under the article number LX95410010 after the model of the special model Generation Six, which differs in the equipment range from the other vehicles by some details. With a price starting at 47.201,35 Euro, Volkswagen offers the Generation Six as an exclusive special model with optional two-color paint finish and many standard driver assistance systems. Including the ACC automatic distance control, which operates up to 160 kilometers per hour, as well as the Front Assist environmental monitoring system with city emergency braking function. The owner and driver of the model benefit from these functions, but in the Bburago format is nothing to be seen. Of course not.

The die-cast Model car, which is equipped with opening side doors, sliding doors and opening tailgate, knows how to excel with an outstanding workmanship and a perfect fit of the functional parts. The model car of the T6 even has a functioning steering to the handmade superbly detailed details and the harmonious impression by the first-class meeting of the lines and the look. There are a lot of sharp lines around the new front design from Volkswagen, slavish correct details like the plastic shutters of the lower cooling air opening, a meticulously reproduced radiator grille with exactly the same imitation of the inner life of the fitted headlights - just a model car can not make a better impression. One of the best miniatures of recent years.

Many details in the interior

The exterior mirror housings are perfectly replicated, but of course not as in the model electrically adjusted, heated and hinged. Well, NZG has taken the decors, ie the decor strip called Dark Silver Brushed, as well as the decorbent in Black Glossy. The sensors for the ParkPilot in the front and rear area are the same as the perfectly replicated interior life of the LED headlights with LED daytime running lights and true-to-scale reproductions of the four light metal wheels Devonport 7 J x 17. They are silvered, while the two- Candy-white and cherry-red. The dashboard and interior, the engine compartment and the trunk compartment are a pure eye-catcher and offer a sumptuous equipment, so we recommend the model car as a must-have for every Bulli fan.