As usual, the two co-operation partners deliver an excellent 1:18 scale model car. Here is our check of the S 213 in Bburago format. 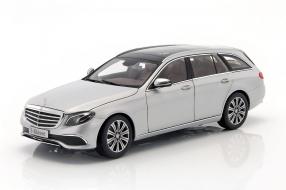 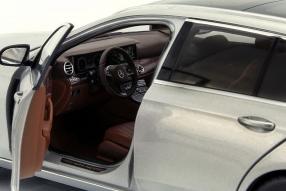 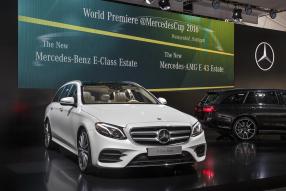 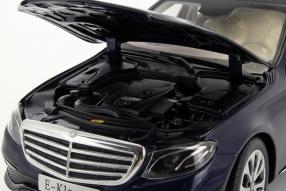 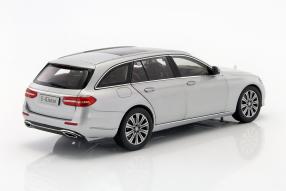 After the sadan follows the station wagon. The Mercedes-Benz car maker also follows this predominantly generally rule with the E-Class of the W 213 series and presented the T-model S 213 in June 2016; Quite cost-effective, incidentally, within the Mercedes Cup at the Tennisclub Weissenhof. Tennis star Roger Federer, as a midwife, removed the cloth from the new luxury station wagon, whose rear is now more inclined and sportier, which unfortunately also diminishes the utility value, because less trunk space is usable behind it. But who is driving through the area with an E-Class T model? Nobody. The model builder label iScale is now using the model car in 1:18 scale and presents with the miniatures in Cavansit blue and iridium silver two high quality diecasts whose doors and hoods are fully openable.

The two models appear in the Mercedes-Benz packaging, so they are commercially available in the classic sense and under the item numbers B66960383 and B66960384. Particularly impressive is the quality of the body, the functional parts of which fit perfectly into the zinc die-casting environment. The gap dimensions and the processing quality are first-class cream. At the same level, the components move: the interior life of the headlights is just as carefully reproduced as the grill masks and the grilles in the front apron. Headlights: Do you know, dear readers, that in the writing of this article and of all others, is this first sketch of the headlights? Somehow this little typo with great effect in the meaning is not to eradicate, but to 100 percent we find it in time.

After this out-of-the-sewing box discussion and back to the miniatures of the E-Class S 213 replicating the sixth generation of this type: "Our premium wagon combines its advantages with even more space, functionality and flexibility," says Ola Källenius, Member of the Board of Management of Daimler AG, responsible for Mercedes-Benz Cars Sales. In the interior, the new E-Class T model, like the limousine, staged modern luxury with high-quality materials and the innovative operating concept, as we were already familiar with the W 213. As a result, the T-model is still the benchmark in the segment. "With a capacity of 670 to 1,820 liters, the T-model remains a benchmark in the segment."

We also see this in the model, whose tailgate can be opened far up. Due to the more elegant appearance of the S 213, however, the luggage compartment shrinks from 695 to 1,950 liters to the 670 to 1,820 liters mentioned. In this way, the interior of the miniature can be seen well, which imitates the luxury equipment of the noble combi very well. The faucet panel, the seating area and, above all, the interior door panels with their colorings have been designed to be pre-designed and harmonious. The black-tinted glass sliding roof is very cleanly fitted into the roof. The hanger handles are separately placed. In October, customers were able to choose between E 200 (135 kW / 184 hp) and E 250 (155 kW / 211 hp) as well as a newly developed diesel E 220 d (143 kW / 194 hp).

At the end of the year, the six-cylinder diesel and petrol engines as well as the E 43 4matic with 295 kW / 401 HP followed. The top-of-the-range Mercedes-AMG E 63 / E 63 S T model is rated at 450 kW / 612 hp. From the engine we see except for an aktibisch well done cover not much, but that is standard today. If you want to see more engines, you have to use models for earlier decades. The body dimensions of the S 213 are growing: in length, the E-Class T model measures 4,933 millimeters versus 4,905 millimeters at the predecessor S 212. The wheelbase grows from 2,874 millimeters to 2,939 millimeters. Height and width are almost the same with 1,480 millimeters to 1,470 millimeters and 1,852 with S 213 and 1,854 respectively. Our conclusion: Great car, both the model and the model presented here.