13.07.2015Ferrari LaFerrari by Bburago Signature – LaFerrari at it's finest

with a matte black model and an upgraded interior of LaFerrari the Bburago series Signature starts in scale 1:18 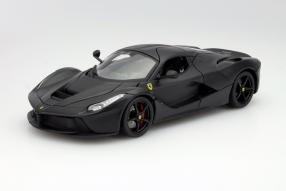 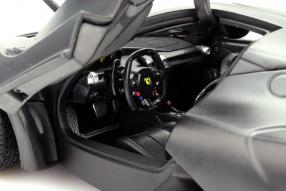 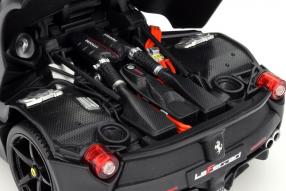 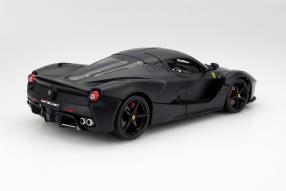 Just on June 10th 2015, we presented the laferrari 1:18 to you our dear model car fans. This twice because we could compare the miniature of Bburago with those of Hot Wheels; both of the same color. The Challenge ended with the conclusion that Hot Wheels is equipped with a far better interior , the models, however, do not differ in the design of the outer skin though: except for the extra functional parts at Bburago.

Now  the Italians with the LaFerrari from the series Bburago Signature put another one out ; the series that differs with the price of 59.95 euros,  20.00 euros more than the standard model cars that are offered  for 39,95 Euro with lots of details. The model car has opening doors and hoods and grants great insight into the  Italian sports car construction world.

Bburago can manage the low price of 39.95 euros only by dispensing the really necessary printing and coloring of the interior, because in the body  the manufacturer from Italy does  not compromise: The mold is followed perfectly in appearance and look of the model - even at a relatively affordable price.

As our comparison  between the Ferrari California T of  July first 2015  has demonstrated - you can check out the link here   -  the makers of Bburago equip the cars of their Signature collection with a complex  interior. Thats how it is in the case of LaFerrari, because even the execution of the air vents in the dashboard of 1: 18ers show why Bburago makes the models more expensive.


LaFerrari of Bburago Signature is tip of the day


And rightly so,  because the finish of the details on the steering wheel with all its reminiscent of the Formula 1 switches is more than a touch better. The design of the dashboard convinced: It has been built much more detailed with the combination of leather and carbon. The pedals are two-tone; the time when the pedals were fully chromed,  unrealisticly,    is fortunately over.

We have the feeling that  Bburago loves the 800 hp V12  engine  so much that it has been reduced equally thorough in both series. More about the technology of the La Ferrari can also be accessed via the link of the article from june 10th. There are no differences in the model engine compartment to California T . Bburago Signature is following in Hot Wheels steps: The model presented here is therefore our tip of the day; resonable for you to also see in the above video. 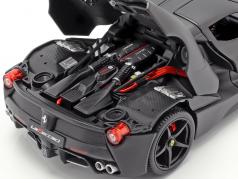 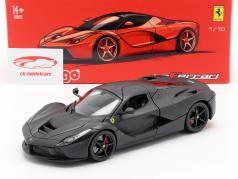