Maybe the most beautiful station wagon or shooting brake in the upper class now also available in scale 1:43. 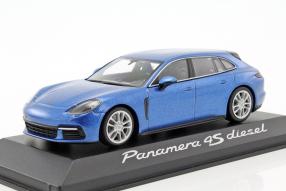 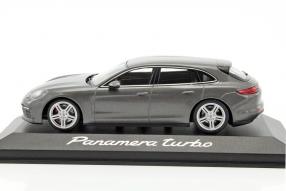 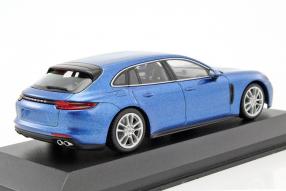 Not all beautiful Station wagons are called Avant, as Audi would like us to believe, they rather carry the name Sport Turismo.  What Porsche introduces under the same name for the Panamera II offers a lot more dynamism and power on its own as the basic version with hatchback. Minichamps received the license to produce the model cars in 1:43 scale and has excellently mastered the line-up of the sport-cars in the shooting-brake style presented at the Geneva Motor Show in March of this year. Look and presentation perfectly match the prototype. Under the item number WAP0207610H the new Sport Turismo appears as a Panamera Turbo in agate gray Metallic. The model car is available as 4S Diesel in sapphire blue under the article number: WAP0207600H.

Both miniatures have now entered the specialist retailer's Porsche range and have made their debut in the branch offices of the sports car builder. They have a correctly scaled-down front apron, which recalculates the structure of the grid inserts of the prototype. In the further consideration the processing of the varnishing as well as the really Markellos fit of the glazing convinces. The exterior mirror housings are correctly modeled on the prototypes. The miniature output of rims, the braking system and the tire at Minichamps' high standard. The chocolate side of the sports turismo, the rear with the three-dimensional tail lights, has been very successful. The doors and hoods of the zinc die-cast model remain closed to the standards in this format.

Enough power to drive golf bags or weekends through the world has the car in any case: Up to 404 kW / 550 hp under the hoods. The Sport Turismo measures 5,049 meters in length, 1,428 meters in height and 1,937 meters in width. Short body overhangs and wheels up to 21 inches in size characterize the silhouette. Wheelbase: 2.95 meters. Starting from the B-pillars, the beginning of the rear doors, the Sport Turismo has a completely independent design compared to the Panamera rear. With a large tailgate, low loading edge, increased luggage compartment volume and a 4 + 1 seat concept, the new Sport Turismo uses technically all the innovations of the Panamera series, which was only completely renewed in 2016.