The small, but fine Automodellbauer presents with two miniatures in the 1:18 scale the counter design to the Porsche 917 from 1970. 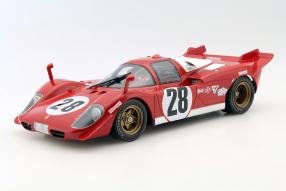 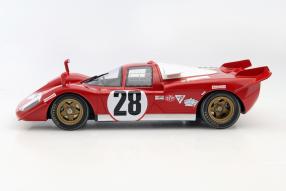 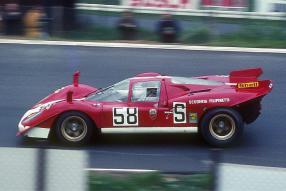 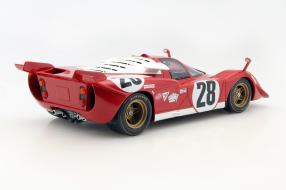 In November 2015, the small-series label CMR presented itself for the first time to the scene and scored the first place with a high-quality Mercedes-Benz W 125 in the size 1:18. Meanwhile, CMR has expanded its portfolio around the MG EX 181 in the same format as well as several Porsche 917 model cars in 1:43. And since the label thus apparently pleased with the vintage 1970, CMR remains in this period and now extends its product range with two superbly made Ferrari 512 S again in the size 1:18. The model car with the starting number 28 tracks the 512 S of the driver triathlon Mario Andretti, Arturo Merzario and Jacky Ickx, who finished third at the end of the 24 hour race of Daytona 1970. This model is on the side with the starting number 27, which was controlled in the same race by Jacky Ickx and Peter Schetty.

Good model selection on the part of CMR

With these vehicles, Classic Model Replicars proves to be a lucky hand in the model selection, because the model cars of the Porsche 917 - the first winner from Zuffenhausen at the 24 hour race of Le Mans - are currently popular among the collectors. To offer you a suitable competitor significantly increases the attractiveness of a collection, especially since the prices of the exclusive Ferrari 512 S available with modelissimo and ck-modelcars move in the fair, double-digit range. The finish of the miniatures, however, corresponds to the often more expensive car models. As has been customary in this segment, CMR has opted for resin as the main material; Doors and hoods remain closed; Which makes Norev exactly the same with the Porsche 917.

The surfaces of the Modellautos of the 512 S are immaculate; The ventilation openings are shown at the front. The high-legged mirror mirrors the model; The windscreen wipers, the fitting of the headlights and the seat of the glazing of the cockpit do not give rise to criticism. The cover of the 5.0-liter engine, the gearbox unit and the magnificently made imitations of the light-alloy rims are also designed to be carried out. No question that the processing quality is at a very high level - also, as far as the reproduction of the details in the interior of the racing car is concerned. We can not really deny CMR a great praise for the excellent work. Congratulations!

At the end of this article, let's take a look at the model: Ferrari, just like Porsche, built 25 pieces of the 512 p. In order to do this, Enzo Ferrari at the time devalued Fiat's shares and thus directly secured the future of his life. The closed coupé brought from its V12 368 kW / 500 hp at the beginning, but was finished just before Daytona; A whole racing season later than the Porsche 917 and therefore in the reliability underlie. Something we have known about Ferrari for many decades. Only one victory - in Sebring - should succeed the 512 S over the 917. We are looking forward to what model cars CMR still has on this topic, because the Ferrari 512 S also had a long version for Le Mans; A semi-open variant was also developed. But before this happens, we want to celebrate with CMR the successful expansion of the starter field.