28.04.2016Spark is reminiscent of a technical highlight from Stuttgart

The label of Hugo Ripert brings a technically good 1:43 scale model, with the Porsche 959 comfort, which simulates a milestone in automobile history. 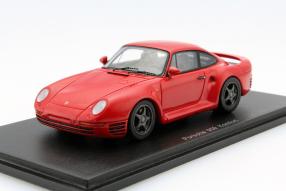 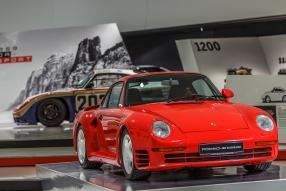 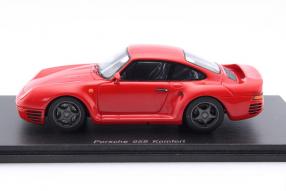 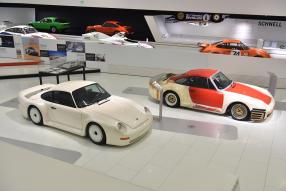 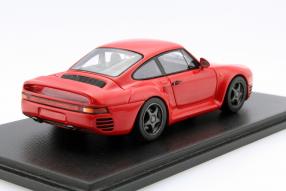 A little over 30 years, Porsche presented at the International Motor Show in Frankfurt, the production-ready version of the also gladly called over-Porsche type 959, which was regarded as the peak of the technically feasible due to its absolute for those days, high-tech equipment. Hugo Ripert and his team from the small series label Spark have released a beautiful model car look that was manufactured from resin plastic and rolls in the classic Porsche Color Guards to the collectors. The model is to have commercially program of Spark under the article number S4477 and costs 54.95 euros. Doors and hoods remain closed as usual in this size, but the attractiveness of the model does not diminish.

On the 30th anniversary of the super-Porsche, the Porsche Museum had organized a special exhibition around the 959 in Stuttgart, which was on view until earlier this year. By drawing up the sports car manufacturer recalled had to offer what technical highlights of the sports car with the distinctive rear wing from 1986 to 1988. The twin-turbo boxer engine with water-cooled cylinder heads and turbocharging, the electronically controlled suspension and electronically controlled variable all-wheel system were groundbreaking; as well as the aerodynamically optimized body they took the future to anticipate years. This combination of advanced technology, race car driving performance and practicality was at that time unique.

Only 292 units were built in series of this particular vehicle. Most in the comfort version, the six-cylinder boxer engine with twin turbo firing from 2.9 liters of displacement took 331 kW / 450 hp. 29 copies were sold as 959 S and made 387 kW / 525 hp. As the first production car the 959 has a turbocharging with 2 parallel, water-cooled KKK turbochargers including intercoolers - until then, was unique for petrol engines. The engine has 2 overhead camshafts per cylinder bank with 4 valves per cylinder. The cylinders themselves are in old Porsche tradition nor air-cooled; the cylinder heads but water-cooled. The exhaust valves have a sodium filling for better heat dissipation.

Materials of the aircraft

The maximum torque amounted Porsche with 500 Newton meters (Nm). The drive unit also required a maximum imaginable, legendary oil filling of 18 liters, as was housed in the front apron of the oil cooler. In addition, the built of the 911 known dry sump lubrication at 959th Injection and ignition are controlled by a Motronic. Courses was changed via six-speed manual transmission. The production spent time in the body of techniques from the aircraft industry. Thus, the roof, the fenders and the rear area of ??made with aramid reinforced plastic, the front skirt made of polyurethane and the bonnet and doors made of aluminum.

The comfort version had all those goodies on the Sport version had to do without for the sake of weight reduction: It accounted for leveling the chassis, air conditioning, central locking, power windows and the rear seats. The Porsche 959 accelerated in 3.7 seconds from 0 to 100 kilometers per hour, reaching 13.3 seconds 200 mark. The top speed is 317 kilometers per hour. Whoever collects sports cars that have made history, can not ignore the Porsche 959 Spark and other vendors. Spark has the look of the 959 perfectly made, very well executed details such as windscreen wipers, turn signals and taillights band into the model. Our Score: A. 2