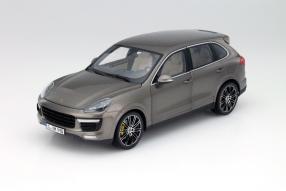 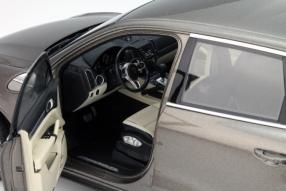 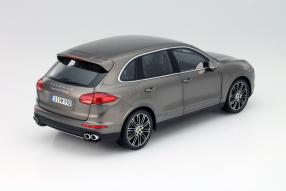 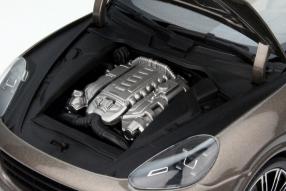 At the North American International Auto Show 2015 in Detroit Porsche presented the latest Cayenne , the Porsche Cayenne Turbo S. The model discussed here  in 1:18 scale got a new loader concept and more power. The modelcar maker Minichamps from Aachen/Germany  in coorporation with Prsche presented the miniature which comes in Umbra-Metallic. Also on featuring: opening front doors, an opening hood and a functioning tailgate. As usual for Minichamps models  in this size, the Porsche Cayenne Turbo S  has working steering and a detailed simulated engine compartment.

Highest quality in the body


The modelcar, item no WAP0213020F, available for 129,95 euros leaves out no  details of the interior. Not to mention that the proportions and the appearance of the 27 centimeters long miniature   are what Minichamps in known for.   Also the finish of the body : Tightest gaps and correct radii of curves  on fenders or tailgates  make the model appear high and noble. But - as I said -  the appearance of the interior leaves us speechless.
Instrument panel, the center console and the elaborate interior door panels exactly meet the shape of the prototype. We notice that the coloring of the components top all previous quality standards. The fine outlines of the air vents are noticed as soon as you open the driver door.  The steering wheel of the Cayenne model meets the form perfectly, especially in the field of double spokes, which are also colored correctly. Also, the shifting because of the shape and coloration earn standing ovations. There is no switch, that Minichamps could not have remodeld more perfect.

Good quality even with the clean-closing functional parts, the doors and hoods  and very well without large gaps in the body of die-cast zinc. Just a pity that the rear doors are closed. The glazing fits perfectly; correctly colored around the edges, but unfortunately  this model is not equipped with a glass sunroof. The engine is designed as a three-dimensional plate; a realistic picture of the driving source. That's the models actual novelty: The new top of the line is characterized primarily by a new loader concept with integrated turbochargers in the exhaust manifolds .
Compared to the previous model the Cayenne Turbo S's  power  increases  by 20 hp to 419 kW / 570 hp. The newly increased power of 50 Newton meters (Nm) to 800 Nm Maximum allows the driver of the Porsche Cayenne Turbo S, effortless performance. We believe it right away, because we know what the Cayenne Turbo Series Type 92A is capable of. The new turbochargers promises  a better response of the 4.8-liter Bi-Turbo according to the manufacturers-From 0 to 100 km in 4.1 seconds - 0.4 seconds faster than the previous Cayenne


The top speed is now 284 km per hour. Colored in glossy black the air intake surrounding at the front of the vehicle and the undersides of the mirrors show some visual accents. Roof spoiler and wheel arch trims are painted in body color; also details that Minichamps and Porsche have acknowledged in  the model car. A big praise for the replicas of the 21-inch wheels,  with black-painted edges. The inside of the LED headlights including Porsche Dynamic Light System Plus (PDLS Plus) is the best that the modelers guild has provided.