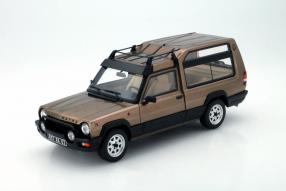 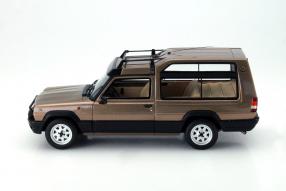 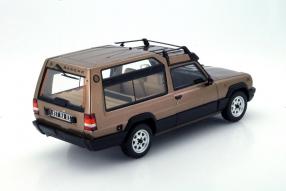 As the  member of the CK-model cars team, which has a lot of fun working on this blog, I am taking  now a very clear position: The Talbot Matra Rancho, nearly 40 years after its debut at the Geneva motor Show and Accessories 1977, does not look old. Hardly a design has its youthful glow like this  SUV  built from the Simca 1100 pickup. Nothing to this date 2015 has made it look outdated, Neither the front with 4 headlights nor the design of the assembley behind the B-pillar- at least that's my view.


Whether you, dear reader, see it also that way, of course is your own desicion. But there isn’t any discussion on how the model car makers from Josselin, France, Otto Mobile, has the model for the Matra Rancho produced: Perfect namely in the appearance of lines, so harmonious in the proportions and look as well as exemplary in the finish processing. Collectors can receives the model of a fascinating trendsetters Under the item number OT154: After selling automakers like Volkswagen, Audi, Opel or with the indicated as such by attachments recreational grounds optics current cars.


The Rancho was a  real trendsetter


Nearly 40 years after the Matra Rancho, provide VW with the Golf and the Passat Alltrack as well as the CrossPolo and Cross Touran, Audi with the A4 and A6 allroad quattro and Opel with the Insignia Country Tourer vehicles to which the Matra Rancho in dynamics and sportiness meet radiating in appearance. With the off-road capabilities, the Matra Rancho wasn’t the best: The prototype for  the model car received only front wheel drive. But even if the modern descendants are all-wheel drive, they are only conditionally suitable for the rough terrain, but are good for uneven terrain. The Rancho, however, could keep up with that.


The model car in Armagnac Metallic is the last model year of this two-door with a large trunk. asusual for resine model cars hoods and doors remain closed. The 1.4 liter engine of 59 kW / 80 hp four-cylinder was from the Chrysler-Simca 1308 wich after the acquisition of Chrysler Europe by PSA Group in 1978 to gave it the nice name Talbot. This transaction also resulted in the renaming of the Rancho. Its rear structure from B-pillar was constructed from fiberglass. Models of Rancho With the suffix X were those that were upgraded: tachometer, aluminum wheels and metallic paint made a Rancho to Rancho X.


While the model car from Otto Mobile was limited to 1,500 pcs., 56,000 of it’s pototype have left the assembly, where Renault today builds the Espace. Because of poor rust prevention of Talbot Matra Rancho it has almost completely disappeared from the streets. Collectors will pay up to 20,000 euros for well-preserved Rancho; a no longer in-excellent condition1982 Rancho  is to available in Bleckede, Germany for currently 4,000 euros. Our model car featured here, however, for 79.95; the collector receives a quality memento of the first of its kind.