With the second backpack golf Otto Mobile brings a successful model of a prototype, which is a real rarity on the used car market. 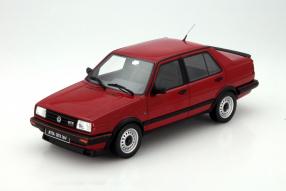 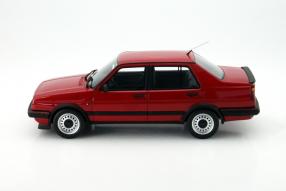 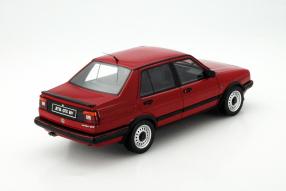 Attentive readers of our blog know that Resine Plastic is the new darling of the model car manufacturer, because the polyurethane resin is less demanding concerning the mold. Making  the  small series often better economically. Otherwise would miniatures such as those from VW Jetta GTX 16V not even possible. Otto Mobile has adopted that role and brought,in small numbers,the very rare model of the Jetta II in the scale of 1:18.

The VW Jetta II was built from 1984 till 1992,. It was based on the Golf II, but offered with the 660 liter luggage space significantly more more space. From model year 1988 Volkswagen introduced the Jetta GTX 16V and wanted to transfer the success of the Golf GTI on the Volkswagen Jetta. Under the names of GTX and GTX 16V had the Jetta the same engine range as the Golf GTI and GTI 16V, namely the four-cylinder with 82 kW / 112 PS and 102 kW / 139 hp. VW also resembled the appearance of the sister models.

The Golf GTI as well as the Jetta GTX received a lowered suspension, a multi-function display MFA, sport seats, red trim on the plastic coverings of the bumpers, side protection strips and a large front and rear spoilers. When we're on the front spoiler: The civil engineers from Otto Mobile have the air ducts for brake cooling of 16V very well elaborated, which remained hidden due the weaker engine. In addition to the rear spoiler of the Jetta GTX 16V was the 4 brake disks, of which the front were ventilated.

But besides that, the French have done a perfect job: Right down to the last bead, the design with the look of the prototype is consistent. Otto Mobile has delegated the performance of the VW Jetta GTX 16V flawless on the model car in 1:18. The structure of the slats in the radiator grille, the design of the type emblems at the front and at the rear, the prototypical black plastic spacers the fenders, the exterior color Mars Red and the design of the exterior mirrors and rear spoiler excite us in the details, as well as the proportions of the Jetta were taken exactly ,
The VW Jetta II GTX 16V was manufactured with only four-door. Inside is also just perfect; albeit spartan contemporary in black, but so was it in the 80s and 90s. Nevertheless, instruments and controls are correctly natural colored . We would like to call the replicas of the steel disc a small work of art, which indicatethe authentic impression of this basic equipment of this time.

The car model is availlable in a limited edition of 1,500 pieces under the item no OT137 for 79,95 Euro. Anyone who has now discovered his love for the Jetta GTX and says "Hey, so a car I'd like to drive, too!", currently has now the opportunity to do so: a metallic gray colored, non bastelter Jetta GTX 16V is to have in Friedrichshafen and currently costs € 3,500 with a mileage of 200,000 kilometers. Perhaps a chance to distinguish itself from the car monotony of supermarket parking lots in very sporty way?