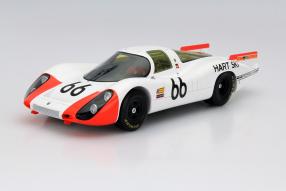 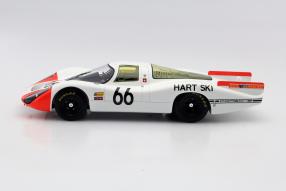 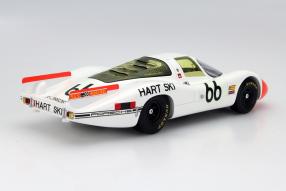 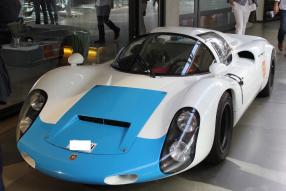 Spark has a model car of the runners-up of the 24 Hours of Le Mans in 1968,Under the article number 18S120, thus creating a truly elegant, with its striking finish, striking the heart of model fans. The model made of resine plastic, in 1:18 scale is the race car of driver pairing Rico Steinemann and Dieter Spoerry after that have competed in the car of the team Squadra Tartaruga with start number 66, the 36th edition of the rich in tradition race at the Sarthe to decide for themselves; then in late summer, exactly on 28 and 29 September.

The reason that for the second time since May 1923 they didnt start in June: The Paris student protests ensured a wave of strikes, which had an impact on the scheduled implementation of the 24-hour race. At the end of Pedro Rodríguez and Lucien Bianchi were after 331 laps with the Ford GT40 in the overall standings ahead. Steinemann and Spoerry came with 326 laps to the finish and thus saved the honor of Porsche, because the 3 factory cars of type 908 is not just shone with great success.

Yes, really, long time ago. The Porsche 907 was the successor of the Porsche 910, built on the same spaceframe and went for the first time in 1967 at the time hunting in motorsport. But, For Le Mans, it was needed for the car to extend to a long-tail, which was then taken into account in 1968 for fundamentally redesigned plastic body. New because it had to be designed as lean as possible, so as to achieve high top speeds as possible. The long-tail stretched the race car by half a meter. Clever was Porsche even then: The steering wheel was first placed in a Porsche racing car on the right side. Advantage: Most racetracks were driven in a clockwise direction; from the right had the pilots thus a better overview. But it was them very warm at the races 1967th

Ventilated brake disc: New to Porsche in the race

The excessively high interior temperature was remedied in 1968 with the opening at the front, this has Spark beautifully modeled. For the first time received the Porsche 907 internally ventilated brake discs, which equally well the team led by Hugo Ripert simulates how the Dunlop tires of the racing car model. During 1967 were gone with the 2.0-liter 6-cylinder boxer engine at the start, it was 1968, the 2.2-liter 8-cylinder boxer also air-cooled with the label 771. had the engine 2 driven by bevel camshafts per cylinder line for valve control.

The Boxer contributed 198 kW / 270 hp instead of 162 kW / 220 PS of its predecessor. Was connected by means of a fully synchronized 5-speed manual transmission type 906. With the new 908, the Porsche factory cars in 1968 went to the start, the Stuttgarter had can only drive out the 3rd place; Disqualification and loss each of the other two made for a rather unpleasant conclusion of this deployment. The picture shows an early Porsche 907 short-tail and was built in 2014 in Dusseldorf.