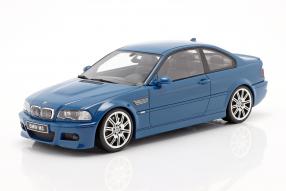 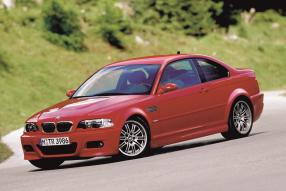 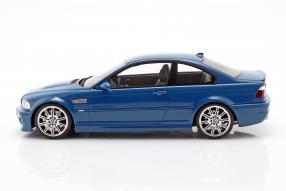 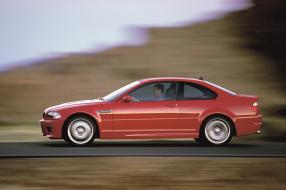 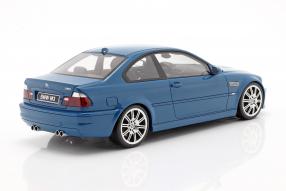 Is there anything more beautiful than to drive into the weekend with your sweetheart or the whole family in a sports car? Right, barely anything, but sporty two-seaters literally set narrower limits. Fortunately, VW invented the Golf GTI and BMW invented the M3, because these cars are the pioneers of sporty four-seaters in the perception of the fans. One of their most prominent representatives is the BMW M3 of the E46 series, for which Ottomobile and Ottomodels presented magnificent modelcars in scale 1:18. This in laguna seca blue and in a limitation of 1,500 copies under item number OT880. As always with these cars made of high-quality polyurethane cast resin, the doors and hoods remain closed, but a look at the details reveals well-made details.

The very first BMW M3 was presented in 1985 as a homologation model for the German Touring Car Championship DTM based on the E30 series. It is thanks to its success that it received successors with the E36 and E46 series, which, however, met the comfort requirements of well-to-do customers a little more. The M3 of the E46 series was built from mid-2000 to summer 2006 and received an in-line six-cylinder under the hood, which conjured up 252 kW / 343 hp from its 3.2 liter displacement. This M3 also differed from the basic model: The arching of the engine hood made of aluminum, known as the Powerdome, wider wheel arches, a 40 millimeter wider track, 20 millimeter wider wheel arches, aerodynamically optimized exterior mirrors, forged 18- or 19-inch light-alloy wheels.

The two-pipe exhaust system with four tailpipes inspires respect; A front apron as well as air outlets or gills in the fenders that serve to ventilate the electronics lift the M3 E46 off the base, as does the Gurney Flap-known spoiler lip on the trunk lid. This M3 already develops 80 percent of its maximum torque of 365 Newton meters (Nm) at 2000 rpm, which ensures the driving pleasure for which the BMW M3 are generally popular. An automated six-speed manual transmission transfers the power to the rear-wheel drive. The Coupé accelerates to 100 in 5.2 seconds; at 250, the electronics regulate the maximum speed. Well-used M3 E46 are currently for sale for 28,000 euros to 35,000 euros. The modelcars from Ottomodels, which are perfect in appearance, are cheaper - also thanks to the current 10% autumn campaign.

It is definitely worth it to purchase one of these modelcars. Ottomodels transferred the line management and design perfectly to the format 1:18, that's obvious. The charm of these miniatures lies in the detial: Just look at the replica of the light alloy wheels! The glazing of the head lights fits perfectly into the resine-environment; the windows as well! The French from rue de l’Ecusson in Josselin have also worked out the radiator grille inserts and the side gills with their subtle chrome plating. The exterior mirror housing, spoiler lip, the end pieces of the exhaust system and the ironing door handles are details that are harmoniously designed. A look into the interior shows an interior that cannot be better reproduced in terms of faithfulness to the model. Conclusion: It is really strong model cars that Otto Mobile is presenting with the BMW M3 E46!

Here: Click to the BMW M3 E46 by Ottomobile