The modelcars in scale 1:18 replicate the French counterpart to the Volkswagen VW Beetle, which had a huge advantage over the one 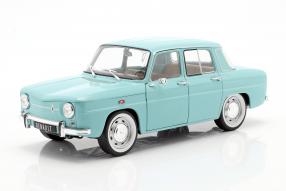 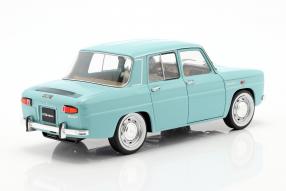 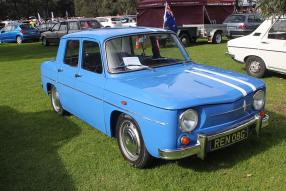 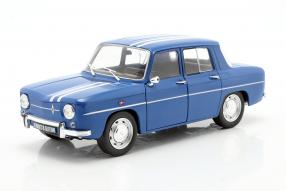 Solido serves the collectors to the Throwback Thursday - with this hashtag the net comunity reminds on beautiful events - up with modelcars to the Renault 8 Gordini 1100 as well as the Renault 8 Major. The miniatures appear in scale 1:18 and are produced of diecast and have two openable doors each. That is not common in model making, but especially the fact of four access doors differentiates the Renault 8 from its German competitor, the VW Beetle. The French did not reach its number of pieces; however, the role model is suitable for well-made miniatures. Because it reminds on quiet tiems, without hectic traffic, as it is the rule these days. And on more humility, without the luxury of todays Renault Megane or Volkswagen Golf. Neither the role model nor the models from Solido offer this.

The Renault 8 saw the light of the world in 1962 and was produced until 1973. The engine offerd an four cylinder inline - not a boxer à la Volkswagen - and was positioned at the rear like at the two-doors limousine from Germany. Nevertheless, he had water cooling. The body was produced at the Société des Usines Chausson, a bus and body manufacturer, founded in 1907 and taken over by Renault in 1960. The Renault 8 was the successor to the Renault Dauphine, but was given the conceptually more modern R4. Didn't the French trust the front-hatchbacks? The Renault R8 Major, which appears under item number S1803601 and in light blue, replicates the luxury version of the series that was built in 1964 and 1965. In 1967, to which Solido attributed the modelcars, the R8 Major no longer existed, but the successor R10.

In sporty outfit, painted in blue with two constrasting white stripes on the driver's side as well as over the bonnet, the roof and the rear, Solido presents the Renault 8 Gordini 1100 to the collectors. The miniatures under the item number S1803601 seem to replicate the R 1134, which were in the trade from 1964 until 1967 with 63 kW / 86 hp, because from 1967 the slightly upgraded vehicles had additional headlights (R 1135) that the modelcars do not have. The base version had 29,5 kW / 40 hp under the hood and reached 132 kilometers per hour; optionally equipped with four-speed manual or automatic transmission. The Gordini 170. And they also offered a more extensive dashboard than the Beetle, but in 1974 a lot changed with the VW Golf in Wolfsburg: Then there were also four doors.