To end the week, Autoart presents us two miniatures, which especially have it all under the hood: The modelcars perfectly match the role model 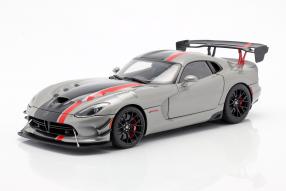 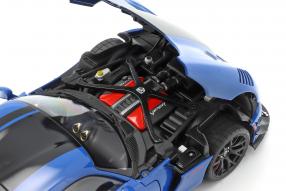 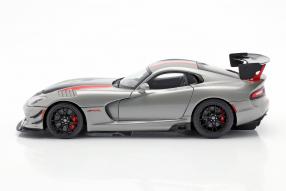 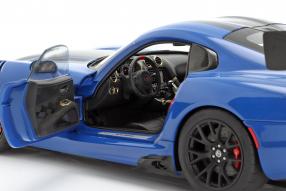 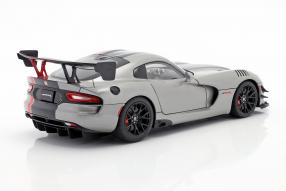 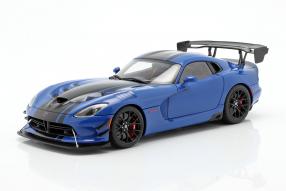 On August 17th, 2017, it was over: FiatChrysler ended the production of the Dogde Viper! The legendary super sports car inspires the fans of this genre for more than five years since 1992. The Viper SRT ACR appeared as the last version and now celebrates its resurrection as model in scale 1:18 from Autoart. The label, known for its high class miniatures, delivered two versions this week: On the one hand the Dodge Viper ACR in billet silver metallic under the item number 71733 as well as in competition blue under 71734. Both modelcars are characterized by the highest quality of the bodies made from diecast as well as by an excellent craftsmanship. As with Autoart - own spelling AUTOart - not to be expected otherwise, the replica of the engine is the absolute highlight of these miniatures, at which doors and hoods can be opened all around.

481 kW / 654 hp work under the bonnet of the Dodge Viper ACR. Under the acronym for American Club Racer, fans of the brand can expect the fastest version of the sports car, which is powered by a V10 with 814 Newton meters (Nm) of maximum torque and shifted via six-speed manual transmission. Autoart has taken every detail of this drive set, which acts exclusively on the rear axle, to a perfection in format 1:18: a feast for the eyes that keeps tears of joy pouring down the car. But Autoart also studied all the other details very carefully and implemented them in the model: the gigantic front splitter and the rear wing including the diffuser give the collectors of the miniatures a realistic impression of what kind of vehicle is in front of him.

Only in the choice of materials, the model differentiates from the role model: Flics, splitter, bonnet, tailgate as well as the underbody exist of carbon fiber at the role model. Though, Autoart transferred the braking system true to detail into the model, but the the miniatures do not offer the ultra light carbon-ceramic-technology by Brembo. But the profile of the Kumho tires in the specification V720 and the correct look of the interior, which offers alcantara and carbon in the version traded from 171,900 euros. Incidentally, the lightweight construction is due to the absence of carpets and insulation in the trunk and nine of the twelve loudspeakers. Do you hear anything from them when the V10 storms 100 kilometers in 3.7 seconds or 200 in 12.0 seconds? The top speed is given with 285. The production of the prototype is over, but these models let the Viper live on!

Here: Click to the modelcars of the Dodge Viper ACR