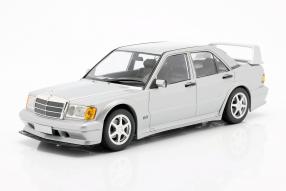 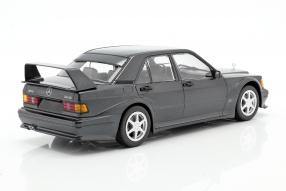 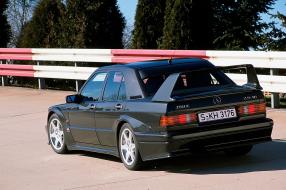 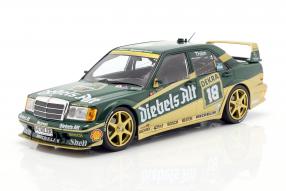 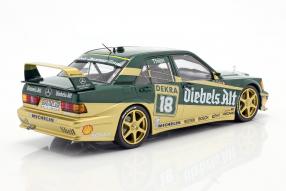 It is burned forever into the collective memory of the fans of touring-car-motorsport: The Mercedes-Benz 190 E 2.5-16 Evo II won 16 of 24 races in the German Touring car Championship DTM in 1992 and took first to third place in the final accounts. Until now, no other car managed to achieve more victories in one season, more points, more best training times, more fastest laps and more leading kilometers than the Mercedes-Benz 190 E 2.5-16, developed by AMG, in its second evolutionary stage, which is designated as Evo II in short form. Last week, Minichamps presented new modelcars to them in scale 1:18. The diecast-miniature appeared two times in civil as well as in the racing version of the drivers Thiim and Asch. We present the models weighing 1,110 grams each and its role models.

In line with the prevailing trend in format 1:18, Minichamps does not include functional parts in the models. For this, they compensate with a look that perfectly matches the lines of the prototypes and a first-class craftsmanship decoration in the motorsport editions, which appear in the colors of the Diebels Zakspeed team. At the time, the company from Niederzissen relied on the drivers Kurt Thiim and Roland Asch, whose models under the item numbers 155923618 and 155923617 are limited to 402 pieces each. The ninth season of the DTM consisted of twelve race weekends with two runs each. The Danish Kurt Thiim finished second in the championship with 192 points behind Klaus Ludwig with 228 points. Roland Asch from Altingen finished sixth in the overall ranking with 143 points.

Minichamps has paid a lot of attention to the details: The small antennas on the roof, the shap of the dashboard in the interior, its roll cage, the separately attached door handles, the filigree exterior mirrors and the perforated brake discs confirm this statement. Eibach, Bosch, Bilstein, Michelin - no team sponsor other than Diebels Alt, Shell and Dekra has been forgotten. By contrast, the exterior traffic mirrors of the standard version or the Mercedes-Benz 190 E 2.5-16 Evo II for the street correspond to everyday traffic regulations. These naturally include a fully furnished interior and are parked in blue-black metallic under item number 155036100 and in silver metallic under 155036101 in the showcases of the collectors; each limited to 1,002 units or 804 units.

A good start into the shortened week

Let us finally take a closer look to the technology of the role models: The Mercedes-Benz 190 E 2.5-16 Evo II is equipped with a four-cylinder with a cylinder head by Cosworth, which developed 272 kW / 370 hp with its four-valve technology. Since the developers look at the weight in view of the use in the DTM, the racing version just weighed 980 kilograms. The acceleration from zero to 100 kilometers per hour is given with 4.5 seconds. the street version of the model year 1990 - role model of our miniatures - performs 173 kW / 235 hp at a maximum torque of 245 Newton meters (Nm) and was already equipped with an exhaust gas purification catalyst. We really enjoy it that Minichamps has dedicated itself to these vehicles.

Click here to the article about the predecessor Evo I