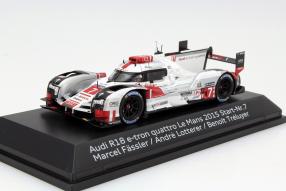 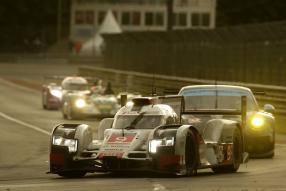 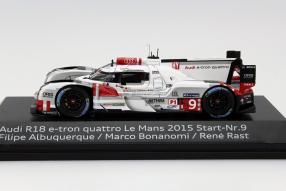 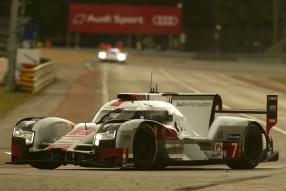 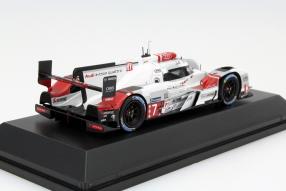 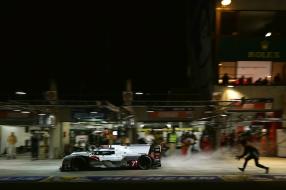 The theme of motorsport wont let us go. After the finale of the DTM 2015 calls us the label Spark with the model car to the Audi e-tron quattro 2015 and the squad cars of Audi Sport Team Joest, this year's 24 Hours of Le Mans in the memory back. The model cars appear as advertising models, ie in the outer packaging of the automaker from Ingolstadt. With this course, the third-place finisher, the Audi R18, the driver pairing André Lotterer, Marcel Fässler and Benoît Treluyer.

It has earned  a 1st place in the showcases of the model car collectors, because the finish of the miniatures in 1:43 scale as Spark otherwise expect top notch. Not only the proportions are perfect, and the usual exuberant as in racing cars decoration, the engineers of the team transferred around Hugo Ripert surfers on the model.

A completely redesigned front and a new hybrid system - these were the most important news at this year's Audi R18 to listen properly to the name Audi R18 e tron ??quattro FP5. Audi wanted to continue with this vehicle the record winning streak of the brand in Le Mans: But after 13 successes it was in 2015 sister company Porsche that won the 83rd edition of the rich in tradition race at the Sarthe.

The best Audi was the one with the number 7, who has seen the checkered flag of his pilots Lotterer, Fassler and Treluyer after 393 laps. The equipped with a 4.0 liter turbo six-cylinder V6 TDI prototype by the rules of the LMP1 class delivers maximum output of 410 kW / 557 hp on the track; supplemented by an electric motor with 200 kW or 272 hp notional. Weighs 870 kg of R18 in the race.

Great performance of the # 8

The car with the number 7 also won both the WEC - World Endurance Champion Chip / FIA World Endurance Championship - scoring the first race at Silverstone and the Belgian Spa-Francorchamps. In Le Mans the car started the race from the 5th place from the # 7. The car with the # 8 and the drivers Loïc Duval, Lucas di Grassi, Oliver Jarvis finished the 24 Hours of Le Mans in 2015 in 4th place; particularly noteworthy because Audi driver Duval aground on a group slower vehicles had heavily throttled her pace due waved yellow flags. His evasive maneuver ended in the crash barrier; a safety car phase for the exchange made necessary a guard rail was the result. The car was only slightly damaged and went after 4 minutes repair time back in the race.

The # 9 with drivers Marco Bonanomi, Filipe Albuquerque and Rene Rast ended after a total of 387 laps on the 7th Place. All Audi were on Michelin tires. This course has replicated at Spark also the team of Hugo Ripert; to recognize the elaborate decals on the sidewalls of the tires. Much effort was also operated by Spark naturally the overall model: The radii of the curves of the body perfectly, the multi-level collection of spoilers at the front represented prototypically. Splinters that especially in the inner workings of elaborately recreated headlights and the delicate antennae on the engine cowling was just given as much attention as the realistic replica of the stern. All in all, drive the 3 models of artisanal view's podium and round depending Audi Collection from.

A word to the video: Images of the race you have certainly still in his head: But how is it received in the Audi City Berlin, will be new to many of you. Therefore, at this point of this video. Have fun.