ck-modelcars.de is at the 500th race with the CK-Trailer live at the spot and brings new exclusive models to the topic Deutsche Tourenwagen Meisterschaft 1991 and 1992 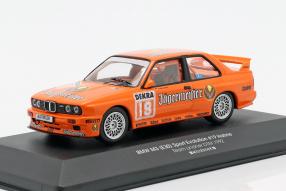 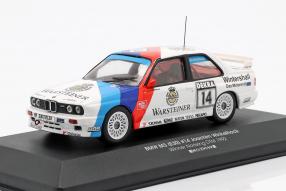 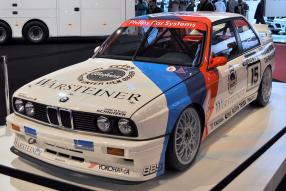 On Saturday and Sunday from 1:00 pm, SAT1 (German TV-channel) is going to broadcast on TV the both races of the DTM at the Lausitzring. The team from ck-modelcars.de on the other hand is live there and welcomes you in the CK-Trailer directly behind the big grandstand. Reason enough, to look in this article briefly at the current positions of the championship and at our new modelcars for this long-lasting and popular motorsport series. Inlcuding the following weekend, there are still a total of six races, at which the drivers and teams can collect points. Audi-driver René Rast is currently leading with 158 points in the driver evaluation of the DTM, followed by brand colleague Nico Müller (136). Marco Wittmann and Philipp Eng are follow with 118 and 111 points on BMW. The winner gets 25 points credited; everything is open with six races still ahead. Audi Sport Team Rosberg leads at the teams.

Since the year 2000 there is a DTM again, the Deutsche Tourenwagen Masters. The successful shorthand symbol graced the Deutsche Tourenwagen Meisterschaft in the years 1984 to 1996, but has been a stand-alone brand for the racing sport series since 2005, which covers nine race weekends this year. This season is the 20th after the creation of the Masters and the 33rd overall, which attracts the fans of touring cars to the racetracks and is organized by the ITR and the German Motorsport Association. In the future, it will soon be drawing level with the Japanese Super GT in order to save costs and create a wider field for the use of the vehicles. Without drivers and fuel, the cars are allowed to weigh 986 kilograms in 2019. They are powered in accordance with the Super GT by 2.0-liter turbo engines, which deliver about 456 kW / 620 hp to the rear-wheel drive.

A racing driver is allowed to use the push-to-pass-function twelve times in a race, with which the power of the four-cylinder can be increased by 22 kW / 30hp in the short term. With this, the cars reach a top speed of more than 300 kilometers per hour! The season final in Hockenheim from October 4th to 6th will be exciting, because there the manufacturers from the Japanese Super GT send - Honda, Lexus and Nissan - each a car to Germany. The vehicles of both racing series meet in late November then in Fuji. Of course there are no modelcars for this event yet, but a look into our warehouse or our webshop reveals an extensive range of high-quality miniatures, which we bring along with many other models in our trailer at the Lausitzring.

Novelties to the topic DTM from CMR

Including the newest modelcars, which indeed refer less to the currently used racing cars but more on cars, which have counted to the most popular cars in the first DTM and that have certainly established the excellent reputation of the championship: the BMW M3 of the model series E30. Available exclusively at ck-modelcars.de are the racing cars of Prince Leopold of Bavaria from 1991, the winner at the Norisring in 1992, Joachim Winkelhock, and Armin Hahne, who also competed in the Sport Evolution version in 1992. The miniatures are in shape and exactly match in look and performance the appearance of the role models are made by CMR diecast and are extremely inexpensive. Come over, visit us at the Lausitzring, see for yourself and experience - quote - the fastest DTM of all times live! Oh, and there is something to celebrate!

The most popular touringcar-series in Europe challenges the 500th race of their history next weekend. BMW has competed 315 races so far and celebrated 87 victories. The first race of DTM history in Zolder, Belgium won Harald Grohs in the BMW 635 CSi on March 11th, 1984. "On behalf of BMW Motorsport, I would like to warmly congratulate the DTM on this anniversary," said BMW Group Motorsport Director Jens Marquardt. "We are happy and proud to have actively helped to shape and in part even shape a large part of the history of this series. With Harald Grohs and the BMW 635 CSi in 1984, we won the very first DTM race and launched the most successful touring car of all times with the BMW M3 in the DTM." You know now, why we are offering you the new models and especially this visit recommend at the Lausitzring?