Only two specimens were built by this rare racing car to the era of mountain races. Four outstanding scale 1:18 modelcars are reminiscent of it 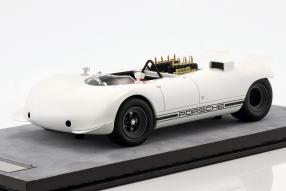 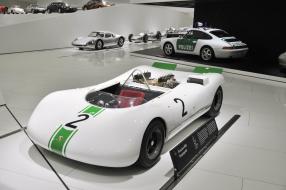 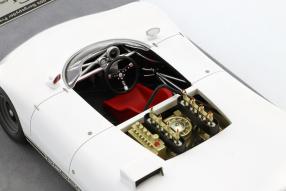 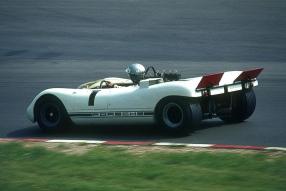 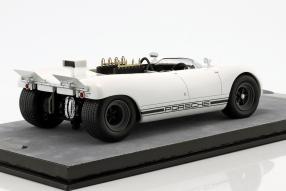 911, 944, 928 and 914 are type and sales designations from the program of the Stuttgart sports car manufacturer Porsche and common for the fans and drivers. With the number 909, however, they are already thinking and even connoisseurs can not immediately refere this name to a vehicle. This is not surprising, because it is the Porsche 909, a car of which only two pieces were built: Under the leadership of the then development director Ferdinand Piëch, Porsche began with the development of the 909, which was designed in 1968 specifically for the European mountain championship. The motorsport department wanted to bring the title after 1966 and 1967 for the third time in a row to Stuttgart and feared disadvantages with its predecessor. The small series manufacturer Tecnomodel devoted itself to this rare model with new modelcars in scale 1:18.

And they have it all: While the outer skin with its curves hardly offers any points that the eye gets stuck somewhere, it is particularly the exposed engine that attracts our interest. Of course Tecnomodel's mold makers have done a perfect job and hit the curves excellently that are hard to put into the model, but the real eyecatcher is the downsizing of the V8, whose spark plugs stand up to the sky. Well, at least that's how it looks. The fan of the approximately 2.0-liter boxer engine is modeled and carries - unlike the 917 - no cover. It went to the mountain with 202 kW / 275 hp, which act through a five-speed gearbox on the rear wheels. The engine had an easy game, because the tare of the car built on a lattice tube frame amounted to 430 kilograms.

This allowed the drivers to reach almost 250 kilometers per hour. The car competed in the race car class of the European mountain championship, in which runs of 1968 factory rider Gerhard Mitter continued to rely on the heavier previous year model 910 Bergspyder and thus also won the championship. Rolf Stommelen on the 909 started in the races on the Gaisberg and the Mont Ventoux, but ended up only on the third and second place because of problems with the engine. Tecnomodel is reminiscent of four rare miniatures made of high-quality resin plastic on these rare racing cars, which bear the names of Mitter and Stommelen, have appeared in a press version Hockenheim 1968 and offer a beautiful view of the lattice tube frame in the cockpit and the well-made instruments.

Here you come to the modelcars of the Porsche 909 Bergspyder