Spark Models brought a model car on the track, which in its appearance is a rarity and few people have seen live: the RB11 2015 Test outfit. 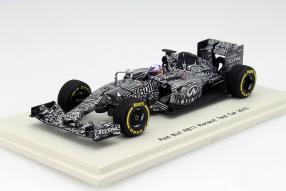 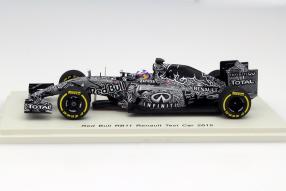 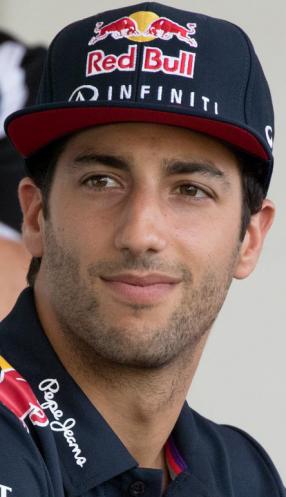 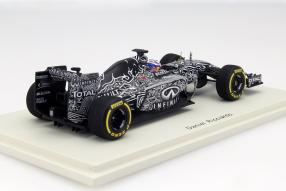 Before you tomorrow betray the dates on which the model car from Spark to 24 appear Hours of Le Mans in 2015, today we show you a little known car from the ongoing Formula 1 season: The Red Bull Renault RB11 of Spark in the scale of 1 : 43 brand new and now parked on our shelves.

In contrast to the well-known look of the racing version - which will be driven by Daniel Ricciardo and Daniil Kwjat with start numbers 3 and 26 - wearing the RB11 still the test coating of pre-season, which obscures the final shape of the car.

This is because not all the intricacies of forming aerodynamically important parts should be obvious during the joint testing with other teams. The cameras irritating - - Similar to prototypes from the construction of large-volume vehicles are glued sheets.

Test results have probably not so much availed

That the paint at Red Bull is but basically from, if we look at the season so far: Fuelled by Renault Energy F1 2015 is currently the 7th Place Kwjat the drivers' championship and his colleague Ricciardo to 8th place with 58 and 55 points. Gone clearly the times in which Sebastian Vettel has been sitting at the wheel of a Red Bull and 4-time world champion was.

Yes, us it was clear that it was bound to happen; the current results of the technically against Mercedes backward class of the Ferrari Vettel is only really read: 178 points after 12 races, 2 wins, 2 second places and 4 third placings have the Tifosi so certainly not expected. The joy after the 2nd place at the Italian Grand Prix at Monza last Sunday was celebrated like a victory. Worth, the comment at this point is an exception tolerated.

By comparison, Red Bull vs. Ferrari

Ferrari has therefore boast 270 points in the constructors' standings, Red Bull is with 113 points relegated to 4th place; Although only 2 positions behind Ferrari, but just what the unassailable points betrifft.Unangefochten at the top: The MERCEDES AMG PETRONAS F1 Team with 451 points. No doubt: The new world champion Lewis Hamilton is hot; The Briton will bring with it the third title, and can be time champion with his 30 years still quite 2, 3 or. 4

For the 27-year-old Australian Daniel Ricciardo as it looks a bit worse; we do not believe that he will get a top-cockpit as Mercedes. But that can also change everything again very quickly: When Mercedes made his comeback, victories were hardly within reach. For the fans of Formula 1 cars of the Spark but rare coloring of the model presented here is certainly such a thing as a must-have in women's fashion. We say: Have fun with it. And tomorrow: Le Mans 2015!