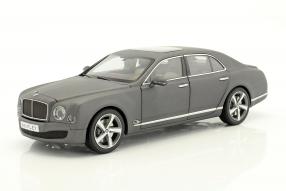 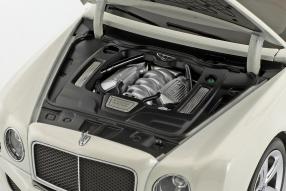 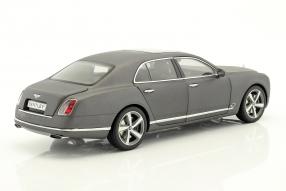 The gap dimensions are still a bit lower, the paint quality is still a tad better, the details of the exterior and the interior a dash of sophisticated - model cars by Kyosho in 1:18 scale are in this size pretty much the best that it buy there. Apart from the miniatures from CMC, of ??course, but they play in the role model as well as in the price in a completely different league. Let's take a look today at the Bentley Mulsanne Speed, which Kyosho supplied under the article number 08910DGS in the color dark gray satin and under 08910GHW in ghost white; made of die-cast zinc and thus equipped with four doors to open and a functioning boot lid as well as with a true-to-original interior design. The replica of the engine can be admired by a hinged bonnet.

The model cars take the not face-lifted Mulsanne Speed ??as a model, which was offered until 2016 and celebrated its debut at the Paris Motor Show in 2014. The speed was and is an uprated, sportier variant of the Mulsanne and had the eight-cylinder from the original model under the hood, whose performance was raised to 395 kW / 537 hp. The maximum torque is an impressive 1,100 Newton meters (Nm) at just 1,750 rpm. The V8 Biturbo of the Speeds has a cylinder deactivation and draws its on an eight-speed automatic transmission to the rear-wheel drive transmitting power from a displacement of no less fascinating 6.8 liters. In 4.9 seconds, it accelerates from zero to 100 kilometers per hour; at 305 the maximum speed is reached.

Further models of the Mulsanne also from GT-Spirit

We have already talked about the outstanding quality of these model cars: The appearance of the model and its design were perfectly transferred to the model. Of the luxurious instruments in the interior you do not want to solve his eyes as a collector. The way in which the functional parts of the diecast model are fitted should be modeled on all modellers. If you like, you can open your own collection area for this model with the already released miniatures of the Mulsanne in black (8910NX) and marlin blue (BL1295). For their facelift and new, 25 centimeter longer EWB version, we offer a model of GT-Spirit can; to watch all in the webshop via the following embedded link.

Click here: for the four Kyosho models and other miniatures of the Bentley Mulsanne in our shop