Spark, in cooperation with the Ingolstadt-based carmaker, has released two models for motorsports in 1:43 scale. In focus: the RS 3 LMS and the TCR 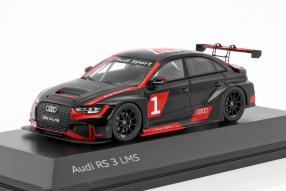 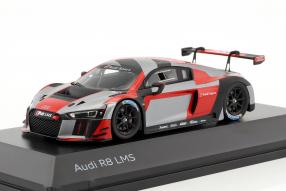 Formula E in Rome, ADAC GT Masters in Oschersleben and the Formula 1 in China - rarely is a weekend as packed with motorsport as the last weekend has been. And we still want to stay on the subject because Spark and Audi have designed two model cars that were delivered in the typical factory packaging: the Audi RS 3 LMS and the Audi R8 LMS in a so-called war paint varnishing. This neutral look of the presentation models is extremely good on the miniatures. The 1:43 scale model cars should not be missing in any collection, either in motorsport or in Audi, as they stand out with their extraordinary decoration as well as their impeccable finish. The proportions of the racing cars are in perfect order. The lines are therefore very similar to those of the prototype.

Audi sees the RS 3 LMS as a perfect entry-level model into motorsport and has developed the small racer for the TCR category. The TCR International Series was designed as a cost-effective alternative to the WTCC and so successful worldwide that it merged for the 2018 season. In Germany alone, 40 vehicles were registered in the TCR Germany. The international edition was established in Asia, Europe and South America. Starting cars are vehicles with four or five doors and a maximum length of 4.20 meters, whose chassis are derived from the production model. In width, the cars measure a maximum of 1.95 meters. The gasoline or diesel engines with turbo may win their power of up to 249 kW / 330 hp from a maximum of 2.0 liters. Without major modifications, the race cars should be used for long-distance and sprint races.

The TCR, a new collection area?

By adjusting the vehicle weight, the cars are brought to a level one season ago. Factory operations are not allowed: the TCR should be reserved for customer sport. And Audi is doing really well: The customer teams of Audi Sport customer racing experienced a successful season opener in January for the IMSA Continental Tire Sports Car Challenge. The Audi RS 3 LMS dominated the newly introduced TCR class in Daytona over the entire race distance. Team Compass Racing from Canada won the TCR rating with two Americans, Britt Casey Jr. and Tom Long. "The TCR class is absolutely exciting, the power density is really high. A great start to the season," says Tom Long. What is there for miniatures that are still yet to come?