With the limited special series, both Porsche and Spark set a car that sets a crown on the 991 II. The model comes in 1:18 scale. 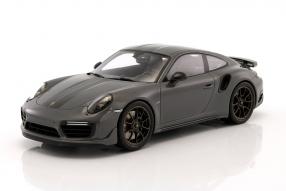 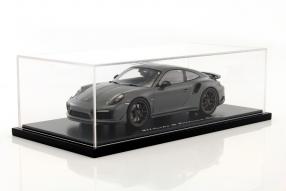 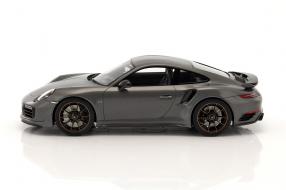 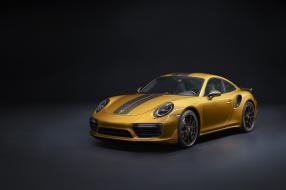 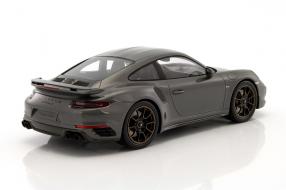 The question of which Porsche 911 is the best of its kind, is the question that has occupied the minds of the fans of the sport car, built since 1963, since the beginning. The Stuttgart coach has enriched the discussion about the new 911 Turbo S Exclusive Series, presenting the strongest and rarest 911 Turbo S ever released: the Coupé delivers 446 kW / 607 hp and is world-wide at 500 Limited editions. The Porsche 911 Turbo S Exclusive Series differs from the standard Porsche 911 Turbo S through its own design, even more sophisticated materials and extravagant solutions in detail. The sports car is refined in elaborate handwork in the new Porsche Exclusive Manufacture at the main factory in Zuffenhausen. Spark has now launched several models on this model: We devote and the latest edition.

In the 1:18 format, a miniature painted in Goldgelbmetallic under the item number WAP0219040H is available in a strictly limited edition of 1,911 copies, but the subject of this article is the matt gray version of the Porsche 911 Turbo S Exclusive Series, which is part number WAP0219020H in only 911 Editions. It offers the collectors a high-quality display case, which is included in the price, which offers Resine protection from dust and damage. However, let's start with the example: compared to the standard Turbo S, the special series offers a 3.8-liter six-cylinder Biturbo boxer engine, which has 20 kW / 27 hp more power. The exclusive Powerkit has a maximum torque of 750 Newtonmeters (Nm), which is between 2,250 and 4,000 rpm.

Performance and equipment in detail

The 911 Turbo S Exclusive Series sprints from 0 to 100 kilometers per hour in just 2.9 seconds. The 200's limit drops after 9.6 seconds. In the top the sports car reaches 330 kilometers per hour. The consumption is not really different from the standard model and is 9.1 l combined to 100 kilometers. As standard, the 911 Turbo S Exclusive Series features black-painted 20-inch wheels with central locking, the design lines of which are highlighted in gold yellow metallic. Spark has precisely reproduced the imitations of the rims exactly like those of the brake calipers for the ceramic brake system PCCB. Also the detail, that the brake shoes for the first time ex works painted black and with a Porsche lettering in gold gelbmetallic, the collector finds again.

More visible than the details concerning sports gear, rear axle steering and assistance systems are the many replicas of the components made of carbon. For example, the front hood, the roof and the side skirts are made of the carbon fiber composite material. The sporty look also emphasizes the two visible carbon strips, which optically contoured the roof and the front hood and were meticulously replicated by Spark. The rear view is characterized by the tailgate of the Aerokit-Turbo, the new rear lower section, the carbon shock-absorber and the four-flush exhaust system with two stainless steel dual-tailpipes. The fenders decorate Porsche Exclusive Manufaktur plaques.

A view into the exclusive interior

The perforated leather covers stretch over the 18-way adjustable sports seats. The roof is made of Alcantara. The metal trim is embedded in the trim of the interior package Carbon. The placard on the passenger's side with the limit number bears witness to exclusivity. The Exclusive Series lettering is also illuminated on the entrance strips, which are also made of carbon. Of course, there is nothing to be seen, as doors and hoods are always closed with the use of the polyurethane casting resin. Unfortunately. Nevertheless: Considering the performance and equipment of the Porsche 911 Turbo S Exclusive Series, we come up with the idea of ??holding it for the best of all nine-nines - whether it's the prototype or the model.