28.05.2017Audi and Ferrari - winner of the Super Motorsport weekend

After 24 hours, an Audi R8 LMS was the winner in the Eifel, while Sebastian Vettel won the Grand Prix of Monaco. The matching models. 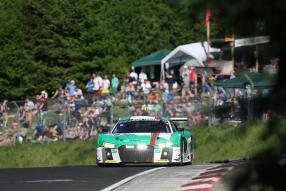 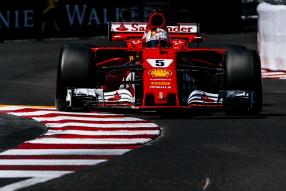 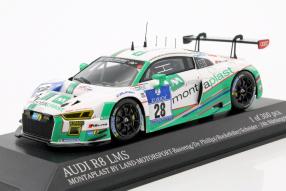 All of Germany were sweating at temperature up to 33 degrees on the Sunday, when two of the most glamorous and famous races lowered the checkered flag. The Audi Sport Team Land has won the 45th ADAC Zurich 24h race at the Nürburgring, with the Audi R8 LMS  No. 29, after a dramatic final phase. Second place went to Rowe-Racing with the BMW M6 No. 98 in front of the Audi Sport Team WRT.with the number 9, after the rain unexpectedly set the field to new challenges. In the Principality of Monaco, Sebastian Vettel was superb, while Kimi Raikkonen secured the second podium; The 90th double win for the Scuderia Ferrari overall and to see for Mercedes-AMG Petronas F1, because Bottas landed only on the fourth and Hamilton on the seventh place. Lewis cool: "Only one battle was lost!"

Conor de Phillippi, Christopher Mies, Markus Winkelhock and Kelvin van der Linde on the Audi R8 LMS from Land are the winners of the 24-hour Nürburgring 2017. One hour before the end of the continuous running at summer temperatures, Of the weekend yet again Dramtik: Land remains first on slicks, but still changes to rain tires, because the team lost in the hustle and bustle of the second-second seconds and the second-placed M6 GT3 with the No. 98 of Rowe. Already one lap later, the Land team was able to get back in the wet sections of the track in the sun: by choosing the R8, the R8 LMS can now give full throttle, while the R8 No. 9 was already out of the way Brno.

At 15:23 the country team is back at the top. By changing to rain tires, the Audi had been able to regain the lead in the all-round round, while the WRT-Audi R8 no. 9 and the Rowe-BMW No. 98 were forced to change the tires again. Pole rider Westphal has put his gluck house SCG003C far before the race into the botany. Quite different from Sebastian Vettel, who won for Ferrari the first victory in Monaco for 16 years. Vettel was able to expand his lead in the overall evaluation to 25 counters by using the Supersofts. The accident between one-time driver Jenson Button and Pascal Wehrlein in the Sauber in the Portier-Kurve looked dramatic, especially since the German had to wait five minutes for rescue. But there was a clear all-clear: after the end of the race, he introduced RTL to the interview.

Here: Model cars from Sebastian Vettel in a overview