The most popular German tour car series starts in its 31st season. We look at the news and the model cars on the subject. 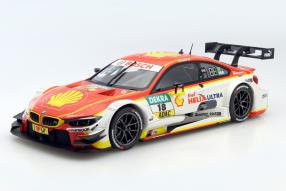 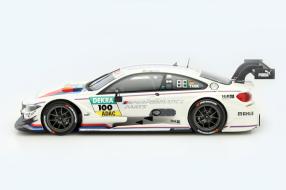 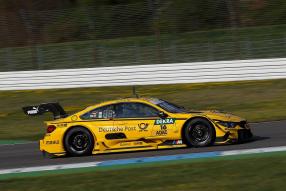 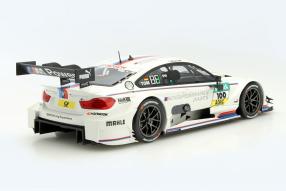 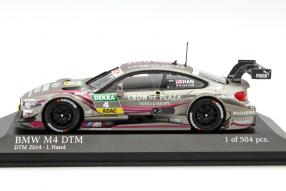 All new is the May: When the beginning of the Wonnemonat in Hockenheim Motorensound can be heard, then every motorsport fan knows: It's time again for the DTM. This weekend, the Touring Car Series will start the first two of a total of 18 races into the 2017 season. Not only Mercedes-AMG and Audi but also BMW Motorsport will be sending six new BMW M4 DTMs to the hunt for further victories in the DTM. The driver's berth is headed by reigning champion Marco Wittmann, who had won eighth out of a total of 15 possible titles for BMW last year since the 2012 DTM comeback. With new racing cars and a further developed format, the DTM promises top-class racing car racing again in the 2017 season. But when do the fitting models come?

A good question, because in 2017, there are also changes to the car bodies pushed over the chassis: DTM racing cars build on a central monocoque of carbon-fiber reinforced plastic and grate tube structures, which we do not see but spoilers and attachments like diffuser already. In order to reduce the contact pressure of the vehicles, various changes in aerodynamics were decided for 2017. In addition to increased ground clearance, the regulations in the area of ??front spoilers, underfloor and diffuser have changed, which directly affects the design of the modellautos and thus brings freshness to the collection cabinets. Just like Mercedes-AMG and Audi, the two BMW teams RMG and RBM as well as their six drivers have been preparing for the new season.

New car proves itself in the tests

The BMW M4 DTM, developed by BMW Motorsport, has proved itself in the course of the test drives and demonstrated its potential, for example with the best time by Timo Glock (GER) at the grand final of preparations in Hockenheim at the beginning of April. However, the cards will be shuffled at the start of the season on the 4.574 kilometer circuit. Traditionally, the first real location determination with completely new vehicles only takes place in the first qualifying sessions and races. Among the innovations are softer and heavily degrading tires, a more efficient drag reduction system (DRS) and details such as the prohibition of tire heating blankets. These changes in the regulations will ensure that the driver's skills are even more prominent and the fans are offered even more action on the course.

Amendments to the Regulations 2017

As on Sunday, there will also be a pit stop in the race on Saturday. Both runs are 55 minutes long. In addition, radio traffic between the driver and the driver will be severely restricted in the future. For additional voltage, the re-launch in a two-row grid formation in the Indianapolis style ensures safety car phases. The use of the DRS is limited to twelve rounds (36 activations) in all races. For the top three positions in the qualifying, 2017 points are awarded: the driver on the pole position receives three counters, the second placed pilot gets two points, the third one another. Each of the three car manufacturers involved in the DTM will compete with six drivers. BMW Motorsport will be sending two teams with three pilots in the future.

The BMW Team RMG will be joined by Marco Wittmann, Augusto Farfus (BRA) and Timo Glock (GER). In the BMW Team RBM, Bruno Spengler (CAN), Tom Blomqvist (GBR) and Maxime Martin (BEL) compete for top rankings. The vehicles of Glock and Blomqvist are used by a mixed crew of RMG and RBM mechanics, the BMW Team RMR. BMW Motorsport Director Jens Marquardt said: "I think we are facing one of the most exciting DTM seasons ever. In winter, the series has set the course for a successful future in many respects - be it with the development of the new vehicles, with changes The regulations and the format or with the new leadership around Gerhard Berger. "

When will the model cars of the season 2017 come?

This is why, according to Marquardt, BMW's people are excited about the first strike in Hockenheim: "Everything that has been in the tests is no longer important." 18 of the world's best riders meet in more than 500 hp racing cars The probably best touring car audiences at all. " It would be nice to decorate the season opener with the right modellautos, but the work on the 2017er models also begin only with this race weekend. Through the link, which we have embedded at the bottom of this article, you can still find a variety of current miniatures from the previous year; Currently because some have only recently been on the market and largely correspond to the new cars. Have fun with it!

Click here: The complete overview of all available model cars for the DTM