In addition to the Continental, the series version of the Speed 6 is to be positioned: As a pure two-seater, sporty and with more wood and leather. Here: The model in 1:18. 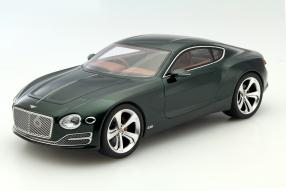 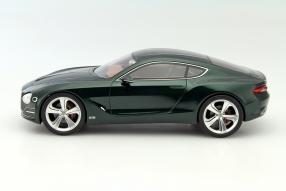 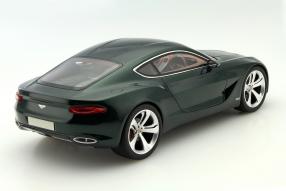 The Bentley EXP 10 Speed 6 was to appear In the style of the sporty Bentley of the 1920s, when he created the concept car the way into the series. His style, according to the British manufacturer, will translate the design language of Bentley into a new era. The GT-Spirit model car, which, in a proven manner in the form of a body made of Resine plastic, perfectly matches the stress-loaded lines of the study presented at the Geneva Motor Show 2015 in its appearance. The Bentley EXP 10 Speed ??6 is "a bold vision for a brand with a bold future," said CEO Wolfgang Dürheimer at the presentation of the concept to be placed next to the family around the Continental GT. Just for the sportier Bentley-Boys, as the racing drivers of the house above all after their former successes in Le Mans as already 1924, 1927 and 1929 were called.

The name of the study is not a coincidence: on the one hand, the Bentley Speed ??6, which won the long-range classic in 1929 and 1930, but also on the Bentley EXP Speed ??8 and its evolutionary stage Bentley Speed ??8; The prototypes that Bentley developed together with Racing Technology Norfolk for the 24-hour race of Le Mans, which the company won in 2003. But with the look of the racing cars the coupé realized here in the model has nothing to do. The flattened front, however, is already adorned by the successors of the current Continental Coupés and Cabriolets, which were announced for 2017.

The "6" in the name also stands for the six-cylinder of the study; Is really a serial version in 2020, it will probably have the V8 of the Continental range and a hybrid drive. Designer Luc Donckerwolke designed the concept car according to the principle "flat, wide, short, concise overhangs, sharp edges", which should be maintained in series. Our opinion: Hot! The British Racing Green is also a good fit for the outstanding model car, which makes an appetite for a series variant. We are looking forward to it and enjoy the lush wood that decorates the interior of the model.