With two new model cars, the new small series label is expanding its high-quality, low-price range of miniatures in 1:43 scale. 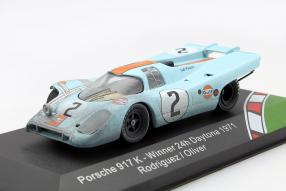 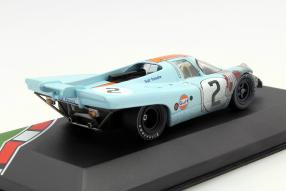 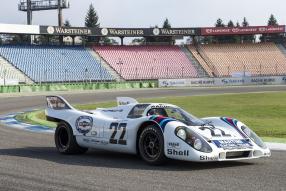 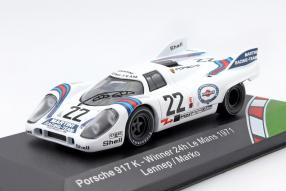 And, dear friends of Model car, did you have a good start into the new week? hopfully better than the drivers pair Pedro Rodriguez and Jackie Oliver from Team John Wyer Automotive Engineering, that won the 24 Hours of Daytona in 1971. Eventhough they stood with their Porsche 917 K as short tail at the top of the podium, but the front end of the race cars looked pretty tattered: Spotlight section and the bow were missing. 4,218.542 km laid the Porsche driver back in which belonging to the World Sportscar Championship race. CMR has devoted to this legendary car its own model and presents the collectors not only the finish perfectly reinvented body design, but also the appropriate pollution that brings a run of 24 hours continuous with it.

Sports car races were held on the so-called Daytona International Speedway since 1962 and Since 1966, the cars are there driving 24 hour, just like Le Mans with one notable difference: The race starts in late January / early February, so the night there lasts much longer than in France during the summer. Among professionals, the mixture of highly banked curves of the four kilometer long oval and the track sections in the infield of the course applies in Daytona Beach for long distance races as unique. Daytona Beach is located in the state of Florida. The Porsche 917 K learned then just running: John Wyer Automotive developed in collaboration with Porsche continues the rear of the brand new sports car, revised the previous Langheck and thought of the short tail, which improved the previously critical driving stability of the 917.

The performance of the twelve-cylinder mid-engine has been increased to 442 kW / 600 hp. From the is - except fan - of course, nothing to see, because the engine cover of the model produced resine plastic remains closed. CMR has alternatively the expression of craftsmanship excellent made the dedicated externally recognizable details and demonstrated for the remarkably low price, which provides for the calculation possibilities in small series models.

In the same year - 1971 - won the drivers Helmut Marko and Gijs van Lennep from team Martini Racing with a 917 K Incidentally, the 24 Hours of Le Mans, which is dedicated CMR another, mating model car. This, however, has a complete body; the initially described model "with no corner" but should also have its charms - especially for diorama builders. And our desire to end for today: Bring your car whenever possible with all corners back home. Greetings from Asslar, Your ck-modelcars team.