Minichamps presented a model car with removable hood with the Williams FW07 1:43. This is something we want more of! 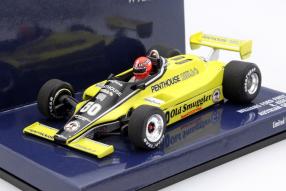 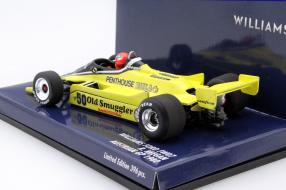 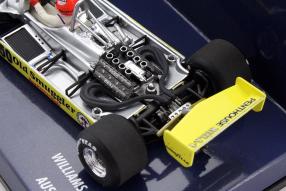 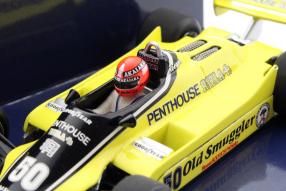 Paul G. and Romy Lang - the power couple behind the company Minichamps which has the genre practically revived with their model car - show a really great novelty: With the model of Formula 1 racing car Williams FW07 from the 1980 season presents the renowned label from Aachen but something else, as we are usually accustomed about F1. The miniature of the controlled from Team RAM Penthouse Rizla Racing and Rupert Keegan race car has a detachable hood. In 1:43 scale is an absolute rarity in the area F1. Current racing cars of Lewis Hamilton & Co. or their models usually do not offer this feature. But in view of the FW07 is clearly what the collectors are missing it.

The fans of this blog know that the model currently usually first appear on current cars in Formula 1 at Spark. The miniatures are made from resin-plastic, which makes fewer demands on the mold and small series so often can only be economically viable. The car models from this polyurethane casting resins are also available more quickly than the more costly in mold Diecast counterparts. This has led to a triumph of Resine models, but in price they are indistinguishable from die cast zinc. With the model under item no 400800150 available and limited to 396 pieces Minichamps running again on top form and proffers the collectors a real nice piece in diecast whose detachable hood revealing a Cosworth DFV 3.0 V8 in 1:43.

Coolers, pipes, struts between the chassis and side walls to their stability and, of course, the motor together intake and exhaust system are designed in great detail. A special highlight is the valve cover with the Ford logo. The finish also, with the Minichamps has recreated the aluminum chassis is made of high quality. Do not leave to be desired, the reduced rear axle construction and the transmission. And that, dear couple long, we want to see in the model for modern models; not only in size 1:18, but just 1:43. Let us look briefly at the history of the model: The FW07 was the world champion car of 1979 by Alan Jones and becoming the first world champion car of Williams.

The team RAM Racing John Macdonald proceeded on the principle to buy cars and not to develop itself, took from 1976 to 1985 at 65 races part and reached a total score of zero. 1980 RAM Racing was with badly worn cars from Williams go. The team, the car with the start number 50 and his driver Rupert Keegan started in the 1980 season only from 8 to 14 races. Born in England racer was already in his time as a not very talented and closed the 1980 season actually with the legendary number of 0 points from; the 9th place in the US Grand Prix. Five Williams FW07 with removable hood, the program of Minichamps out already: The vehicles of the factory teams and with Alan Jones at the wheel announces the firm of Paul G. and Romy Lang fortunately more versions of this fantastic model cars.