LookSmart sets and completes the previously deliverable range of model cars for Bentley SUV to other color versions. 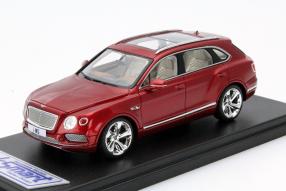 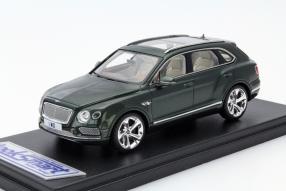 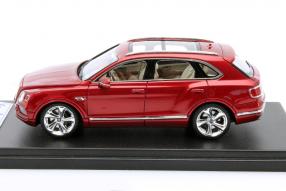 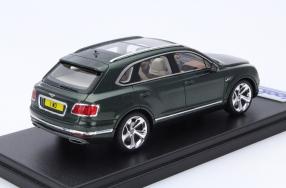 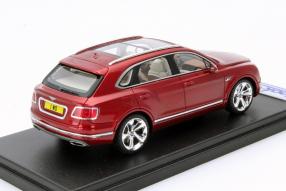 The Bentley Bentayga is the single largest and most expensive, most powerful and most impressive SUV in the luxury segment, the auto industry has to offer. After the small-label LookSmart has delivered at the beginning of the first models in Moonbeam Grey Metallic, Black Crystal Metallic and the almost poppy Orange Flame Metallic on trade, now the episodes are in the paint St. James Red and British Racing Green. Like their colleagues, the new Bentley lush detailing, which is especially evident in the interior and thus impressively demonstrated that "The best or nothing" - slogan of Mercedes-Benz - by no means always comes from Stuttgart.

LookSmart has implemented exactly the lines of luxury cars in 1:43 scale, and taken the proportions of the large five-door model perfectly. In the appearance of this model corresponds exactly his example. The characteristic become for the brand Bentley large internal round headlights and the light rings on the outside edges can be found in model Bentayga as ausschauend again, like the radiator grille. The seated in the front apron side grills convince with proper appearance and carefully crafted surface. The chrome wheels are a nice break in the showcases of collectors, where usually dominate silver replicas of alloy wheels. Brake system, roof rails and door handles are qualitatively well modeled.

The oversized glass roof allows the collectors a great insight into the interior of Bentayga. Instrument panel, center console and door panels have the equal share of wood applications, like the real thing. LookSmart has taken all the details exactly: instrument panel, controls and their coloring and distinctive to the brand outlet openings for ventilation. Overall, presents the fittings system of Bentayga in 3 colors. However, a feast for the eyes is the seating system whose diamond stitching ensures their purchases already at the model of luster in the eyes. The interior of the model Bentayga is the perfect match and shines with a mistaken from mold her elaborate quality that is unmatched.

The key data for the prototype

By Bentayga the brand wants to set accents and complements the series of their limousines Flying Spur and Mulsanne and the Continental coupe to an impressive from every angle SUV. The Bentley Bentayga comes with 447 kW / 608 hp from a revised W12 with approximately 6.0 liters of displacement and fabled 900 Newton meters (Nm) maximum torque to its buyers. 2.4 tons this luxury car, brands such as BMW and Mercedes-Benz can not match. the Bentayga is shifted via an 8-speed automatic transmission from ZF. With its 308 hours kilometers tip the Bentley Bentayga the fastest SUV in the world. He accelerated, according to its manufacturer in 4.1 seconds from 0 to 100th


We wish you both quick, but good and safe start into the spring week!