With the model car in 1:18 scale, GT Spirit brings a splash of color that makes you want to spring and brings life to the collector display case. 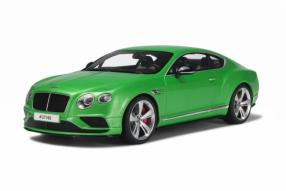 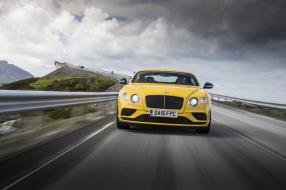 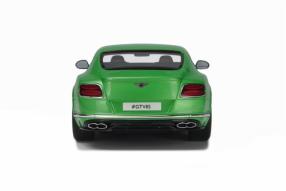 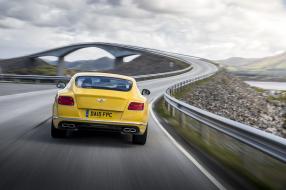 Yes, dear friends of model cars, according to the weathermen it is supposed to get in our republic nationwide double digits in the temperatures till mid march. We have froze long enough - is therefore time. As green as a frog is also the model car Bentley Continental GT V8 S Coupé therefore, that introduces us GT Spirit. painted in the color Apple Green simply does not match a coupe of this size to what a German's idea of ??a luxury automobile, but the chronicler of this blog can only applaud: Life is often gray enough, and a little more color really for us all harm anyone. Let's hope that spring in all its diversity shows soon and look at the Bentley closely.

A Continental GT is a classic Gran Turismo; less sports car but rather Cruiser for relaxed gliding. But the Bentley brand now has even a great tradition in motorsport; even at the 24 Hours of Le Mans. Therefore repeatedly emphasized the sporty image even when far too bulky basically for sporty driving modes Continental GT, which is also the V8 Coupé S stamped into the sheet metal. The vehicle is based on the so-called 2nd generation of the Continental and since 2014, the next strongest stage of the basic eight-cylinder engine. The V8 S pulls out approximately 4.0 liters capacity 388 kW / 528 PS; the maximum torque is 680 Newton meters (Nm). It is shifted by means of an eight-speed automatic; the top speed is 309 kilometers per hour.

In 4.5 seconds, the approximately 2-ton GT V8 S accelerates to 100 kilometers per hour; quite a sports car worthy of value. The makers of GT Spirit have transmitted the specific nuances of the GT V8 S very carefully on the model car, which has been prepared from resin plastic. This includes especially the front apron, which is different from other versions. The new revolving chrome molding around the rear and the Auslasskiemen in the form of the winged B has GT Spirit reduced as skillfully, as the diamond quilting on the seats in the interior. Meanwhile, instrumentation, seat design and instrument panel are shown in the same perfection as the overall appearance of only 1,500 units built model 1: 1 to that of the model corresponds. A good model that brought us there GT Spirit for 99.95 euros. And in the example of the spring should be set so that it arrives as quickly as possible with us.


You all a good start in the week!