The Fürther label created with the legendary sports cars in 1:18 scale a blast, whose spirit relives in the new Porsche 911 R re. We show both. 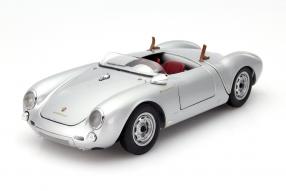 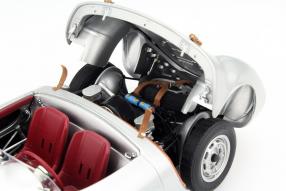 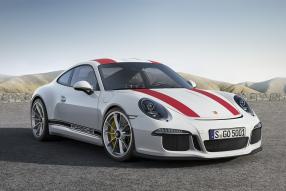 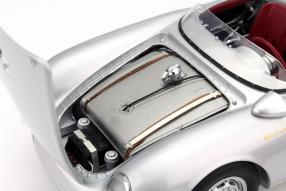 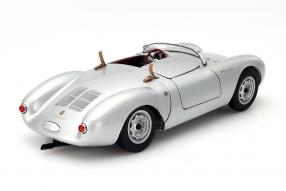 A unique opportunity is offer to the Porsche fans with the model car of 550 A Spyder Manufacturer Schuco 1:18 scale because ck-modelcars leads this Model car on sale. The highly detailed, produced from zinc diecast car model white with a variety amazing to inspire prototypically remanufactured details and is currently held for 179,95 Euro for 129,95 Euro to have. The Porsche 550 A Spyder model provides a true interior features, a detailed simulated engine compartment, accordingly, opening bonnet, but also opening doors and a working boot lid. The coolest detail par excellence is to track the straps with which the tanker is held on the body.

The prototype of our model was produced in the period 1953-1957. His purism is found in our view, the new Porsche 911 R again, the Stuttgart sports car manufacturer presents at this year, just opened Geneva Motor Show. The model of the 550 A is painted in rich in tradition and silver dedicated to the version with three-dimensional framework. There are 2 bases for the sports car: the one with a flat frame and having a three dimensional space frame that bore the name 550A. Exactly this later version picked out the premium label Schuco to transmit a Porsche 550 in the model of the scale 1:18. The Fürther pulled out all the stops for the detailing was carried to the extreme. The original high price is justified by precisely these subtleties. One look alone to the leather straps and buckles that fix the hood or the said tank straps.

Take a look at the underlying engine, which retold the 99 kW / 135 hp payable drive set to the two blue-painted coils meticulously. The four-cylinder boxer engine developed his power at 7,200 rpm and sat in the middle of the vehicle, which the constructed for the former race car gave a neutral handling. The engine took its power from 1.5 liters of displacement and is connected to a five-speed gearbox. First, its bodies emerged at Weinberg in Stuttgart. Originally designed for racing was the 550 A Spyder but also be approved for road traffic. From the end of 1954 were sold over 100 built at Wendler in Reutlingen 550 luxury from 24,600 DM.

For purists who prefer to turn by hand and place less emphasis on luxury, the Porsche 911 was R created and unveiled at the Geneva Motor Show 2016th With a 368 kW / 500 hp 4.0 liter boxer engine and a six-speed sports transmission is the 911 R in the tradition of his historical model: a street-legal racing car from 1967. That was the 550A also; street legal. The built in small-series 911 R (R = Racing) was used at rallies, at the Targa Florio as well as world record attempts. The new 911 R sets as its legendary predecessor to consistent lightweight design, maximum performance and unfiltered driving experience. With a total weight of a full tank 1370 kg, the limited edition of 991 units special model is the lightest current 911 model.