23.02.2016Minichamps and Mercedes: Looking Back and Looking Ahead

While Minichamps is in the making of the successful past of Mercedes-AMG F1 Petronas 1:18, Lewis Hamilton looks on 2016th 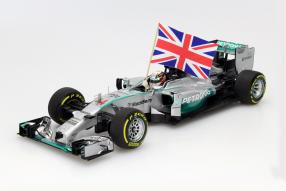 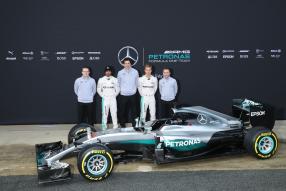 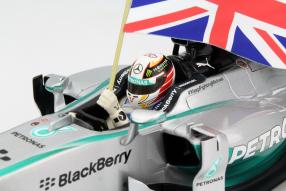 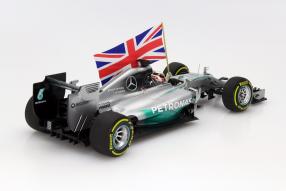 Minichamps prepares with the model of the Mercedes F1 W05 Hybrid 1:18,  presented under the item number 110140544, the recent past of the Mercedes AMG Petronas F1 team. Lewis Hamilton took the prototype of this model the first Drivers' World Championship title for the brand with the star. Minichamps dedicated this success to a limited 2,014 units model wearing the decoration of the car in which it is taken up to the final race of the 2014 season in Abu Dhabi. The responsible of designer Aldo Costa F1 W05 can boast an impressive record: 19 starts, 16 wins, 18 pole positions, 12 fastest laps, 701 championship points, 31 podiums and 978 laps over 4923.835 kilometers.

As befits a newly minted world champion, so Hamilton celebrated with a flag, which he held in the cockpit. So Minichamps provides for driver figure with helmet this very special equipment feature, while Lewis Hamilton even at the currently running test in Barcelona on the future of the year 2016 takes place. A future with a race more. "This year there are 21 races. That's great for both the fans and the drivers. But there is for everything a limit and I think that we have more or less reached the maximum. When I think of all the team , all the mechanics and engineers, who work so hard on the cars when we are traveling, they are too long from home and their families away. at the moment it seems to be okay. "

But, as Hamilton continues, it must be ensured that it is not too much for them: "I love racing, so I welcome other races, but with 21 races it will be a tough season this is hard for the team you are working... so much and are so long away from their families. the cars are harder rangenommen and for drivers there are more points to win and to lose. This is the World Cup even more challenging and is still open, as it did in the past already was with Baku in Azerbaijan, we come to a new city and we return to our home race in Germany -. on both I really am very we're facing a great season "..