Certainly a niche model, which is not so often asked, but inspiring as provided in die cast zinc, and with many exciting details. 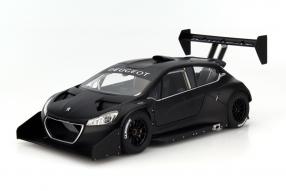 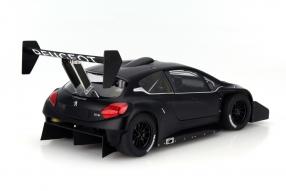 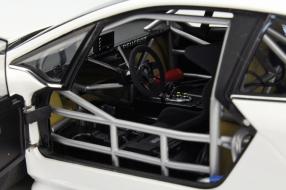 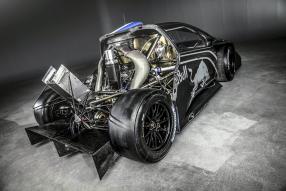 Not in race suit, but painted in one colour. so debuts the Peugeot 208 T16 as Plain Body Version of AutoArt 1:18. The model car simulates developed for the Hill Climb Pikes Peak International Hill Climb Motor sports prototype, with its last version finite rally driver Sebastien Loeb on 30 June 2013 at the participated in the legendary hillclimb. With his time of 8: 13,878 minutes he put directly on a new course record. Similar to prototypes, so builds the Peugeot 208 T16 on a consisting of a steel tube frame chassis on grid over which a body made of carbon-fiberglass composite construction has slipped. Perhaps that's why even the hood and rear of the model are closed, but the doors are open.

The inner workings of the model

And these doors free a lot of insight into the structure of such automobile. As would be the mentioned framework, has the AutoArt pipe for pipe recreated meticulously. Part of this design is also the holder for the far-reaching into the interior of the steering column to the steering wheel ultramodern racing car from which the course of sequentially switching six-speed manual gearbox are subject. The steering wheel of the model affects the way to the front wheels. AutoArt the instrumentation and the switch has prototypically reconstructed and dyed. Straight on the center console is a lot to see them. Name lettering, fire extinguishers and exceptional in model Door tethers are also components of the interior elaborately made.

When designing the outer skin AutoArt did an excellent job. We can attest to this model also harmonious proportions and a properly captured, converted in the 1:18 scale appearance. Overwhelming - even for a display case full of model cars in motorsport - is the front spoiler; a shovel, with which determined the way the currently overcommitted with snow roads were open spaces loosely in the eastern US. Likewise overwhelming are the side skirts - they act like real steel beam - and the optimum pressure on the mountain for the sake oversized rear spoiler. To achieve output on a curved road is namely in such a small car such as the 208 is one, not so easy. Since it need such a device.

The technology under the skin

Under the carbon body contains numerous components from the long-distance race car Peugeot 908, which was launched in Le Mans. Suspension, brakes, cockpit and the spoiler at the rear are identical. The biturbo engine corresponds structurally to the older, already installed in the Courage C60 V6. Whose base have the customers and the Renault Espace already can get into the garage in the Clio V6 home. The longitudinal center built 3.1-liter makes the Peugeot 208 T16 643 kW / 875 hp. With a curb weight of 875 kilograms and this performance the performance weight of the four-valve engine is 1 kg per hp. From 0 to 100 kilometers per hour, he accelerated the car in 1.8 seconds; 200 is the car with the help of the PSA engine in 7.0 seconds. And how quickly is he in your cabinet?