With a particularly beautiful model car of the Porsche 964 in 1:43 scale we send you into the weekend of the 3rd Advent. A look back at the years 1988 to 1994th 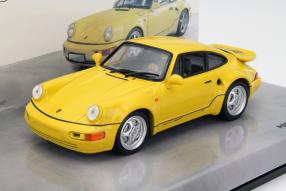 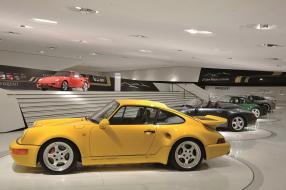 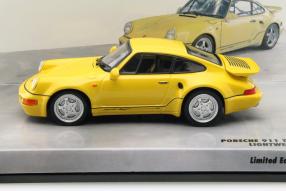 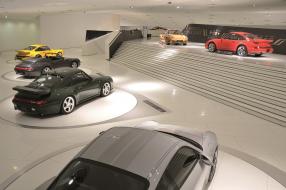 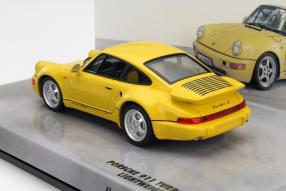 The model car of the Porsche 911 Turbo S 3.3 Lightweight Series 964 from Minichamps lets us look back: In the 1980s, it ran at Porsche in Zuffenhausen nowhere near as good as today. The Porsche 911 was a G-model after 15 years of production at the end of its technical and commercially meaningful ways. Although outwardly not much changed - at first glance, only the bumpers were at 1988 presented 964 new - the successor has been reinvented. With the completely new aluminum chassis with MacPherson struts at the front and rear coil springs into account the interests of Porsche for the first time calling for greater convenience buyers. Power steering and ABS were standard; the new 3.6-liter engine was a dual ignition with knock control and a fully controlled three-way catalytic converter.

For the first time there's a four-wheel drive under the galvanized sheet of Porsche 911 The new full fairing of the car floor, a drag coefficient of 0.32 was obtained. The rear spoiler fixed until 1988 was replaced by a withdrawable version; the bottom of the Porsche 964 was fully dressed, which significantly improved the speed limit. To reach a 964 with 185 kW / 250 hp, the same top speed of 260 kilometers per hour as the stronger by 37 kW / 50 hp Porsche 911 Turbo (Type 930, G-model) from the previous generation. The 911 Turbo based on the new 964 came with the 1991 model on the market. In this model, many features of the old turbo model (Porsche 930) were taken. For instance, the front and rear wide fenders and the rear spoiler fixed large found again.

The engine type 930 of its predecessor has been used to drive it, its performance has been increased with an improved engine control and a larger 30 percent intercooler to 235 kW / 320 hp. In the interest of fans of more power the plant 1992 Turbo S Lightweight developed. Made of this was from the Porsche Exclusive Manufaktur than one of 86. In fact, he is the ancestor of all GT2 models. The 3.3-liter engine of the Turbo has been optimized and made 61 hp more than the starting point, at the end so 282 kW / 381 hp. The weight has been reduced by 180 kilograms. The lightweight sake power steering, electric windows or air conditioning, central locking and rear seat bench has been removed. Doors, bonnet and boot lid were made of expensive and relatively untested then still carbon fiber.

Perfect Details in the model

All this drives the purchase price of the 911/964 Turbo S Lightweight to 295,000.00 DM. A very exclusive story that  Minichamps has made as model from this fascinating sports equipment in 1:43 scale. As always, the Aachen engineers have transferred form the curves of the outer skin perfectly into the model, which is made of die-cast zinc. The proportions and the appearance of 54,95 euro expensive miniature coincide perfectly with the model, which we found images from the Porsche Museum and a video found by a Porsche fan called partial flow. The model car is limited to 1,008 copies worldwide and have under article number 436 069 170 at the legendary Speed Yellow. The exterior color is also found in the interior again; Bucket seats and interiors are a real feast for the eyes.

We wish you all a great weekend and a nice 3rd Advent!