Herpa completes the takeover as a supplier for Porsche in terms facegeliftetem nine-eleven. The 991 / II now in the half-open version. 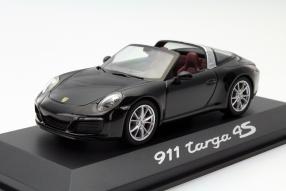 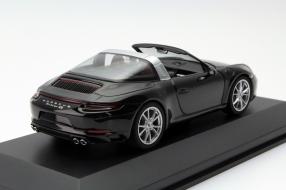 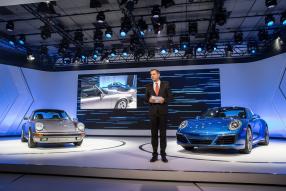 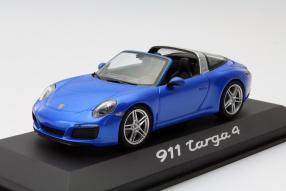 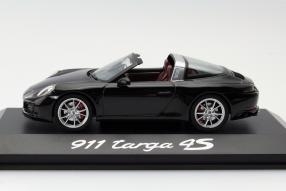 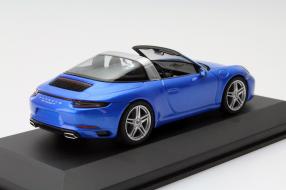 Coupe, Convertible and Targa - these are essentially the body versions of the Porsche 911. It's the same with the latest generation of the sports car classic, the model cars in 1:43 scale that are for the first time in decades no longer made from Minichamps but Herpa from Dietenhofen. The management of the producer of high-quality plastic miniatures speciallizes in size 1:87 / H0. The company moves in recent weeks and months, a work order after the other on land, reaped advertising model jobs from BMW for setting the X4, the M4 or the sedan and Cabriolet from Audi A3; all in 1:43. So that Herpa but may produce a Porsche 911 as an advertising model, so we did not expect and the already published by becoming aware of this news.

We presented the cabriolet and the coupe of the 911/ II from Herpa in the link below. With the Los Angeles Auto Show followed the Targa. This bring the Dieterich Hofener and Porsche initially in the colors Black and Sapphire Blue Deep Metallic under item nos WAP0201410G and WAP0201390G in the accessories shops of the in-house sales and selected retailers. Also on board are the model cars the optical refinements to the new 911 Carrera generation: So the light strip between the rear lights is particularly vividly by his emphatically now three-dimensional shape; the prototype as the model car. This feature also highlights the typical format of the four-wheel-Penalty, whose rear fenders bulge out as before a total of 44 millimeters outwards.

A small but subtle differences

Other identifying features of the new 911-generation  are headlights with four-point daytime running lights, shell-less door handles and the newly designed boot lid with vertical slats and new tail lights - among others with the characteristic four-point stop lamps. Herpa has worked out these details all very carefully. Specifically, the changes at the rear have been worked out very knowledgeably.

Obviously benefited Herpa in the manufacture of molds for the rich body curves of the long-standing experience in modeling, because the well-known as a supreme discipline task - to take curves perfect and implement the model - is generally regarded as very difficult. But we recognize the model car no weaknesses; everything looks exactly as the prototype, the new 991 / II.

The model, made of die-cast zincdoen't  have one  thing: opening doors and hoods. But with the open roof can see how meticulously the Dieterich Hofener have dealt with the issue interior very well. No detail was left out. Only, from the great technology we have so naturally nothing. The new, for the 911 now standard built turbocharged engines perform better and consume less, the advanced all-wheel drive increases, according to Porsche the dynamics and driving safety: "An even larger spread between round and long haul also offers the standard adaptive PASM (Porsche Active suspension Management) with 10 mm lowering. on request extends the rear axle for the Carrera 4S models optionally available also the dynamic driving range again significantly. "

Faster at lower fuel consumption up to 12 percent

The higher performance of the S models resulting from turbochargers with amended compressors, a specific exhaust system and a tuned engine control. In combination with the now electrohydraulically controlled four-wheel drive, the 911 Carrera 4 reached 4.1 seconds from 0 to 100 for the first time even better acceleration than its sister models with rear-wheel drive (4S 3.8 seconds). We wish Herpa, that sales of the new model cars able to continue this pace. They would have deserved it.