Jörg Müller, Uwe Alzen and Bob Wollek made it, with the 550-horsepower race car, to 2nd place of the 66th edition of the traditional race. 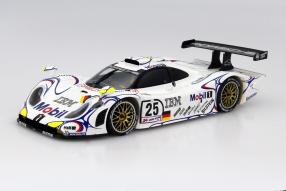 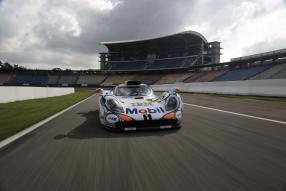 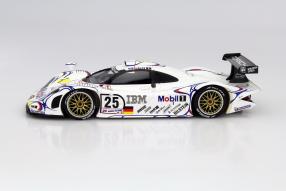 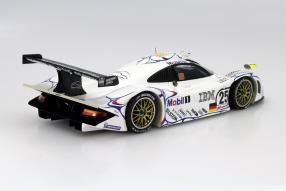 The 24 Hours of Le Mans are something like Wimbledon for Boris Becker, the living room of the sports car brand, so to say: With the Porsche 919 Hybrid, Porsche took this year's 17th overall victory at the Sarthe. Among them was one that Porsche in 1998 won the 911 GT1. Laurent Aiello, Stéphane Ortelli and Allan McNish won after 351 laps the race from the 06th and 07th of June. Runner-up was the Porsche 911 GT1 with the driver combination Müller, Alzen and Wollek who brought the car with starting number 25 with just one lap less finish. A double victory so all the way to the heart of the sports car manufacturer in Stuttgart; the 16th overall and therefore the final success of this type until 2015. The two open Porsche LMP1 of Joest Racing, however did not come to the finish.

The team led by Hugo Ripert reminds us of this first double victory with the Porsche 911 GT1 1998in scale 1:18. Made of Resin plastic Spark delivers a perfect in appearance and look coinciding with the model miniature that carries the model according to the start number 25 and is characterized by accurate reproduction of all stickers and decorations. Attachments such as exterior mirror housings and rear spoiler corresponding in shape to the model; BBS wheels are small works of art in their field.

The interior is every detail again as it saw in front of him Müller, Alzen and Wollek. The build quality of 149,95 Euro costing model is free from any blemish. Unlike the model cars from Minichamps from Le Mans - for example, where a model Porsche 956 Langheck 1:18 scale, which we have reported accessed via this link products - is the engine cover does not decrease the 911 GT1. Since the fan is of course lost a lot. A replica of the 6-cylinder boxer engine would certainly be in the 1998 edition a visual treat. The drive then generated 404 kW / 550 hp from 3.22 liters displacement, supported by dual exhaust charging. The Biturbo developed at 5,000 rpm with maximum torque of 650 Newton meters (Nm).

No remedy against Porsche

The maximum speed has been handed down with 325 kilometers per hour. The carbon brake discs had front and rear 380 mm diameter and delayed by means of an ABS. The tires come from Michelin. The curb weight is 950 kg indicated with. The 911 GT1 1998 is an enhanced version of the prototype from 1996, with respect to this not only redesigned, but also flat. Only it was believed Porsche to have against the 1997 used in the FIA ??GT Championship, faster Mercedes-Benz CLK GTR a chance. Unreliability of the CLK-LM came Porsche but not really help; something they had not even necessary: ??After 19 and 31 laps was with AMG-Mercedes already concluded; against the experience of Porsche in Le Mans is no escape as rapidly grew. What until now applies: One year after the comeback in 2014 winning Porsche again.